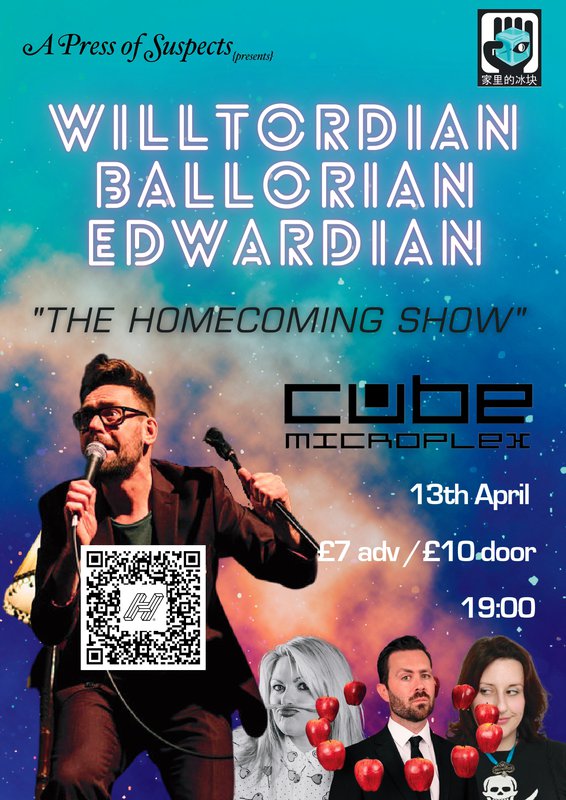 WILL EDWARDS lived in Bristol for the first 39 years of his life (1978-2017). In that time he performed in many bands (Bronze Age Fox, Minotaur Shock, Strange Billy the Saint, The Radiant Sounds of Dust, Seitz) and also created the collective/promotion company A Press of Suspects {presents}. In 2022 he got married and became Will Skillington.

In late 2017 he moved to Plymouth to be a father. In early 2018 he began performing comedy.  After a short period of experimentation he became Willtordian Ballorian Edwardian: a man with a penchant for Owls, Loop Pedals, Casio keyboards from the 1980’s and FX units. He creates songs and set pieces which range from everyday occurrences to obsessions with other Comedy Performers.

He’s coming home to his favourite Bristol venue (The Cube) and he’s bringing some friends. Expect a manic, chaotic whirlwind of an experience.

He brings with him the wonderfully gifted:

ANNA KEIRLE: In 2003 Anna replied to an advert for new comedians. She had no material and had never done a stand up set. Her third ever gig saw her come second in the Funny Women awards. She reached the Edinburgh Fringe final of “So you think you're funny?” with her fifth gig, compered by Bill Bailey. Her sixth gig was in Torquay on a Wednesday night.

Anna has a cheeky comedic storytelling style and has been described as a bumpkin. She has, however, won the Weakest Link! Performing as a standup locally and internationally, she’s a quick-witted, responsive MC with experience from tiny clubs to major festivals.

SUZY BENNET: Former Butlins Redcoat and proud Devonian Suzy ‘accidentally’ won an award on her 6th gig and has kept the laughs, and her accent, going strong ever since, performing around the UK as well as overseas. She is the voice of the ‘Plymouth Trails’ Tour app and was recently named as one of the ‘50 Coolest people from Plymouth’ by the Evening Herald  - the list was in no particular order so she assumes she came third after Dawn French and Wayne Sleep.

ED TRIPP: Ed is a stand-up poet, writer and visual artist, living in Devon. An absolute treat, enigmatic, mysterious, menacing…..and hilarious, he’s been described as "Dave Allen meets David Lynch". He’s previously brought his unique brand of spoken word to nights and festivals such as Spork! Poetic Licence and WOMAD. (Edward may be known to some by his previous pseudonym, ‘Roisin’s Brother’).

Tickets are just £7 adv / £10 door which is an incredible price for this line-up.