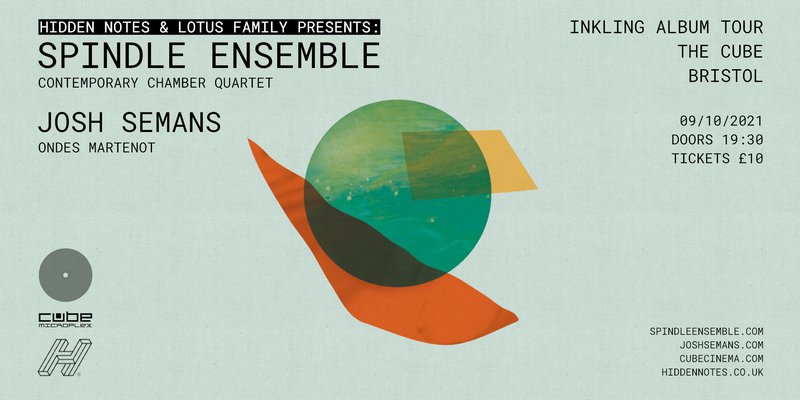 with support from Josh Semans

Spindle Ensemble are performing a tour of intimate venues across the UK to celebrate the release of their second album 'Inkling' (Hidden Notes Records).

Their music sits somewhere between classical and contemporary, always melodic and instantly recognisable by their unique instrumentation for a chamber quartet:

Listeners may hear influences from composers such as Satie, Pärt, Ravel, Reich, Glass and Moondog in their music but might also find the soundtracks of Morricone and the minimalist aesthetics of the Penguin Cafe Orchestra nestled alongside the more experimental leanings of groups such as Rachel’s, Esmerine, Bell Orchestre and Amiina.

The quartet was formed in 2016 by bandleader and composer Daniel Inzani, accompanied by a collection of versatile classically trained musicians who also perform a huge variety of other styles with the likes of Hannah Peel, Yola, Charles Hazelwood’s Paraorchestra, Bristol Symphony Orchestra, Tezeta, Mesadorm and many more. venues they have played include the Union Chapel, Southbank  Centre, Bristol Beacon, St George’s Bristol and festivals including Shambala and Hidden Notes they continue to bring their music to a diverse and ever-growing audience.

Josh Semans is an ondes Martenot player, composer, and producer based in the north-west of England. His work is uniquely textured, employing a range of instruments, sound-sources, and processes. A keen improviser, his creative process is a cocktail of exploration, repetition, and abstraction.

He works tirelessly to bring the ondes Martenot - one of the earliest electronic musical instruments, invented by French cellist and wartime radio operator Maurice Eugene Louis Martenot - to new audiences, and is a fierce advocate for the preservation, proliferation, and publication of the unique and seldom heard musical instrument.

Josh regularly performs works and structured improvisations for piano and ondes Martenot, and recently premiered a new interpretation of Messiaen's 'Oraison' for four ondes Martenot as a unique and immersive 'virtual quartet'. In 2019, along with other musicians, he debuted 'Enharmonic’, a composition by Miriam Bean commissioned by Journey's Festival International for piano, cello, double bass, viola, and ondes Martenot.

In June 2020 Semans released his debut album ...And the Birds Will Sing At Sunrise featuring nine tracks of original works for ondes Martenot, piano, and electronics. Inspired chiefly by meditations on the environment and humanity’s relationship with it, the title track features additional ondes Martenot by Takashi Harada and Tomomi Kubo and the single ‘Trust’ was exclusively premiered by radio presenter Elizabeth Alker on her Unclassified programme on BBC Radio 3.

The album was followed by the release of the double sided single Marbles/Holding Pattern in conjunction with Piano Day 2021.

As well as his solo work Josh regularly collaborates and works with other musicians and composers having appeared on tracks by Luke Sital-Singh, Simeon Walker and Alexandra Hamilton-Ayres, has composed and produced soundtracks for short films and feature film soundtracks including performing on Tony Award winning composer Alex Baranowski’s score for Jacqui Morris’ adaptation of A Christmas Carol.

Josh plays a Dierstein ondes musicales, serial #022, built for him in Paris by Jean-Loup Dierstein.

TICKETS ARE SOLD IN BLOCKS OF TWO, FACE COVERINGS REQUIRED AT ALL TIMES (UNLESS EXEMPT)

IF YOU, ANYONE IN YOUR HOUSEHOLD, OR ANYONE YOU HAVE HAD CONTACT WITH DEVELOPS CORONAVIRUS SYMPTOMS – PLEASE STAY HOME! IN THIS CASE, OR IF YOU DON'T FEEL UP TO ATTENDING FOR ANY REASON, WE WILL OFFER A FULL REFUND ON REQUEST, IF YOU DO NOT WISH TO DONATE YOUR TICKET COST. GIVE CUBEADMIN@CUBECINEMA.COM AN EMAIL WITH YOUR TICKET REFERENCE.