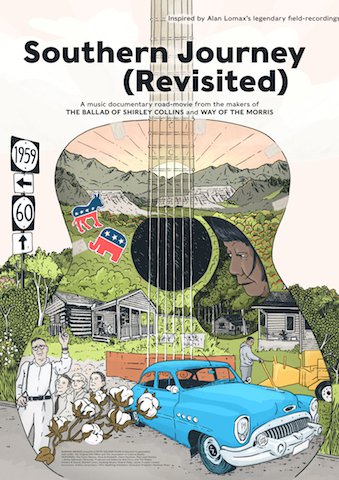 Join us for a digital screening of

+ live Q&A with guests after the film

Times Past and Times Present, this is music doc and a road movie, it's a meander with folk history and folk's future being played out in our times. Set against the incendiary backdrop of the USA's 2018 mid-term elections, and accompanied by a glorious soundtrack of blues and bluegrass, hollers and spirituals, the film retraces the route of an iconic song-collecting trip from the late 1950s –Alan Lomax’s so-called “Southern Journey”. The film-makers — who previously made The Ballad Of Shirley Collins, about the English folk singer who assisted Lomax in his quest — travel across Appalachia and the Deep South, using Collins’ memoir America Over The Water as their guide.

Alex Neilson speaks with Rob and Tim, the directors of Southern Journey (Revisited) after the film via Zoom. You are invited.

Alex Neilson is a drummer, percussionist and singer who is based in Glasgow. He is a founding member and main songwriter of folk-rock group Trembling Bells (2008-2018). He is also known for his continuing collaborations with Alasdair Roberts, Will Oldham and Richard Youngs, and for his work with elusive American singer/songwriter Jandek. He has played drums with folk legend Shirley Collins and so is apt for his role as host of the Q&A. Alex has played The Cube many many times in different guises and collaborations...he rocks and writes too.
@alex_neilson / https://www.andrewliles.com/10-questions/alex-neilson/

The film is a distinctly compassionate spun set of narratives, with under-statement and humbleness being apt rather than bluff and blunder. It's hard to be grand and hardline when there is so much subtlety and small details to be heart-felt....“the documentary gently investigates how much those old-timey sounds reflect both a warm nostalgia for bygone days and a wilful denial of the cruelty and intolerance that was pervasive back then.” - Screen International

Featuring:The Como Mamas, Anna & Elizabeth, Glen Faulkner, The Local Honeys, & Jimmy Edmonds. We have the film’s cast of local characters to help provide a much-needed riposte to certain widely held and enduring beliefs about the Southern US –or the ‘Red’ States as they have come to be known. Made at a time when the hard-won victories of the Civil Rights movement (which served as the backdrop to the original Southern Journey) are under pressure, the film travels beyond reductive stereotypes to explore instead an complexity of an area steeped in a fertile musical heritage.

Rob and Tim's other two films have both been shown at The Cube. This time they join us in a digital Q&A after the screening with special guests. Join us. A link will be sent out to ticket holders.