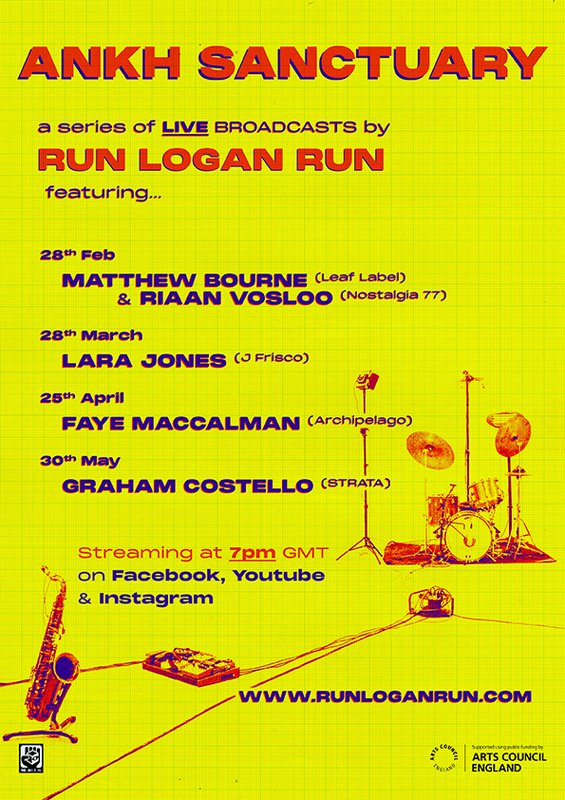 A series of strictly LIVE broadcasts by Run Logan Run, featuring special guests that we've met on our travels…

Every last Sunday of the months Feb - May at 7pm GMT.

No prerecorded videos, just the live stream from the studio!! And we've got a high grade production team so you can expect the very best AV experience!!

There will be music, followed by time for Q&As.

Made possible with public funding from Arts Council England.

28th Feb - Matthew Bourne & Riaan Vosloo
A stalwart of the UK’s avant-garde scene with a reputation as a fearlessly unpredictable pianist and composer, Matthew Bourne is a passionate explorer of sound, possessed of a burning desire to make music on anything old, broken or infirm.

(Dr) Riaan Vosloo is an eclectic musician / composer / producer and immensely talented bass player. He was a founding member of Nostalgia 77 (Tru Thoughts) and has worked on albums for Universal, Sony, Ninja Tune, & Decca records.

28th March - Lara Jones
Recent recipient of the Peter Whittingham Jazz Award, Lara Jones is an exceptionally inventive saxophonist based between London and Leeds. She is a member of the avant-garde trio J Frisco, and at a young age has already received the Jerwood Jazz Encounters Fellowship and been championed by Manchester Jazz Festival’s Hothouse Programme.

Lara’s recent solo album ‘Ensō’ was created from field recordings of train journeys and Jazzwise Magazine (Debra Richards, UK) described it as “stretching the elastic edges of jazz to explore our inner worlds”.

25th April - Faye MacCalman
Based in Newcastle, saxophonist / clarinetist / singer Faye MacCalman is a driving force on the Northern UK Jazz scene. She leads award-winning jazz-art-rock trio ‘Archipelago’ and has worked with such luminaries as Arun Ghosh and Zoe Rahman.

Faye is a Serious Take Five artist and has also received the Jerwood Jazz Encounters Fellowship, as well as support from the Manchester Jazz Festival Hothouse Programme and the Peter Whittingham Jazz Award. Kevin LeGendre described her as “providing food for thought on what jazz is and can become”.

30th May - Graham Costello
Glaswegian drummer and composer Graham Costello is a powerhouse on the kit. His band STRATA (Gearbox Records) were nominated for Scottish Album of the Year, as well as seven Scottish Jazz Awards.

Graham’s career began in the Scottish DIY / Indie scene and progressed into EU tours with noise duo Young Philadelphia and electro-psych group Outblinker. He brings the same relentless energy to his work in the jazz world and is absolutely thrilling to watch live!