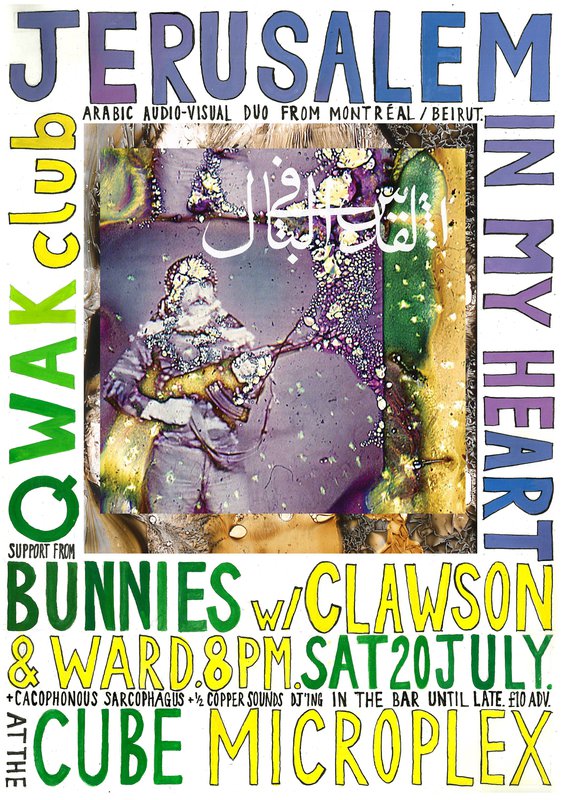 QWAK club #3: Jerusalem In My Heart

Plus Bunnies with Clawson & Ward

A carefully curated night at the Cube bringing the outer reaches of sound, vision and performance together with a fun and inclusive atmosphere.

Jerusalem In My Heart

Jerusalem In My Heart (JIMH) return to Bristol after one of the most truly unforgettable performances in Bristol in recent years at Church of St. Thomas the Maryr last year.

Montréal-Beirut contemporary Arabic audio-visual duo of composer-producer Radwan Ghazi Moumneh, voice, electronics, buzuk and other instrumentation and Charles-André Coderre, whose innovative 16mm film techniques frame JIMH’s entire visual identity – currently using archival photos from the Arab Image Foundation, which have been re-photographed and subjected to experimental chemical treatments of Coderre’s own invention. JIMH are undoubtedly one of the most engaged and forward-looking groups at work in avant-garde Middle Eastern music today.

Last year saw the release of JIMH’s third album, Daqa'iq Tudaiq (2018), which translates as “minutes that bother/oppress/harass”. For Side One of the LP, JIMH assembled a 15-piece orchestra in Beirut, enlisting the celebrated Montréal-Cairo musician/composer Sam Shalabi (Land Of Kush) as arranger and musical director for the recording of popular Eygptian classic “Ya GaratAl Wadi”. Anchored by the stately hypnotic pace of plucked and percussive instruments (riq, santur, derbakeh, kanun), the piece unfolds with lush, languid, reverb-drenched manoeuvrings through virtuosic Maqam shifts (oriental scales). Moumneh’s melismatic lead vocals and electronic production sensibility pay homage to the genre’s documented historical recording traditions, while pushing things subtly and respectfully into new territories of sonic distortion and noised, artefact-laden transmission. Side Two comprises four tracks of non-ensemble “solo” material by Moumneh which push rupture and decomposition/recomposition of tradition further into avant-garde territory–voice, buzuk and electronics take the lead on a suite of emotive and evocative songs.

Witnessing JIMH live finds their profound conceptual and aesthetic engagement with Arabic/Middle-Eastern tradition come into its own and cannot be recommended highly enough. This performance, one of only two currently scheduled in the UK for 2019 (the other being at Supersonic), in such an intimate and well suited space as the Cube Microplex, will almost certainly be one of the most affecting and nourishing performances to be witnessed by those in attendance for years to come.

Bunnies use pirated material, vocal manipulation in a surge of rhythmic textures playing between noise, melody, and syncopation.

Clawson & Ward use sculpture, drawing and video to give shape to ongoing interests in manipulative strategies used by individuals, groups or institutions to gain or maintain influence over others, and their environments.

Dancing in the bar until late with DJs Isaac and Adam, who were so good at QWAK club #1, it was a no brainer inviting them back to do it all again.