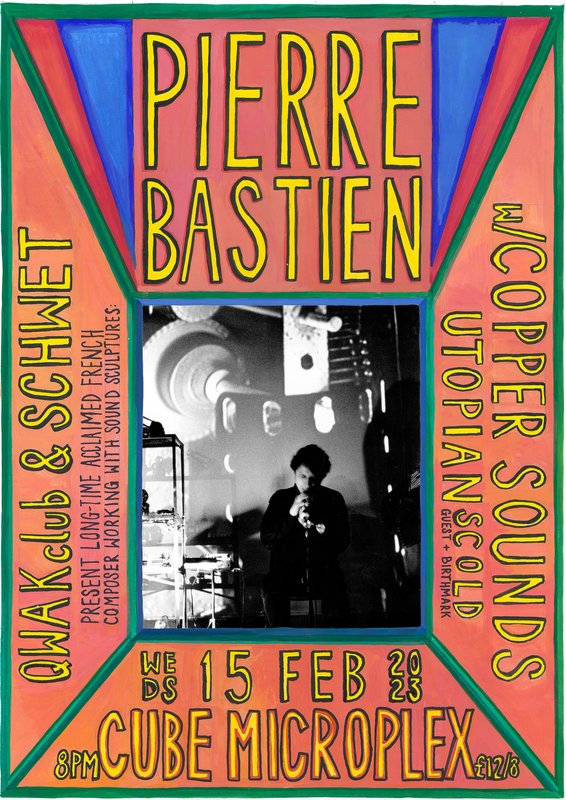 PIERRE BASTIEN b. 1953
Pierre builds his own machineries, at the cross between music and visual art, that blends live trumpet sounds with screen projections of on-site, mechanical sound sculptures in a very poetic way. His work is described as “a timeless sounding orchestra, both futuristic and slightly dada, conjuring ancient traditions in its surprisingly sensuous music.”

Bastien has been called a “mad musical scientist with a celebrity following” by The Guardian. Past collaborations include Can's Jaki Liebezeit alongside Jac Berrocal, filmmaker Pierrick Sorin, fashion designer Issey Miyake, singer and composer Robert Wyatt and Aphex Twin (who released three of his albums on his label Rephlex). In 1986 he formed his own self made one man orchestra, Mecanium and made over 20 records over the years.

Opening the evening will be an optical sound performance from the brand new project UTOPIAN SCOLD, a duo of Guest (Jabu) on projectors and Birthmark on FX.

More on Pierre Bastien by Rahma Khazam in The Wire magazine:
“I like to combine a cello or a viola with a godje from Niger and a Javanese rabab" enthuses French musician and instrument builder Pierre Bastien. “It’s like in a city, where all the different cultures blend with one another: you get a richer palette of sounds.” Bastien enacts this interplay with his Mecanium, a Heath Robinson-like contraption which plays all kinds of instruments at one and the same time: its bows, drumsticks and plectrums can beat an African drum or Indonesian gamelan, play a thumb piano, kora and harmonium, and bow a violin, while activating an entire string quartet. The mechanism that drives it is based on simple principles: intricate constructions built from Meccano parts and powered by motors taken from old record players activating the bows and sticks by means of gears and pulleys. Yet Bastien’s bizarre contraption is more than just a hotchpotch of seemingly incompatible instruments: despite its apparent lack of sophistication, a Mecanium performance is a complex, emotionally charged affair. This fragile, home-made orchestra executes elaborate and strangely moving symphonies, while the miniature pulleys and levers cast giant shadows on the wall behind them, and Bastien himself sits amid his mechanised instruments accompanying them on trombone, violin or musical saw.”

QWAK club is a carefully curated night from The Cube Microplex, bringing eclectic avant garde sounds, visuals and performance together with a fun and inclusive atmosphere. All ticket/door revenue goes to the artists and towards the upkeep of The Cube.