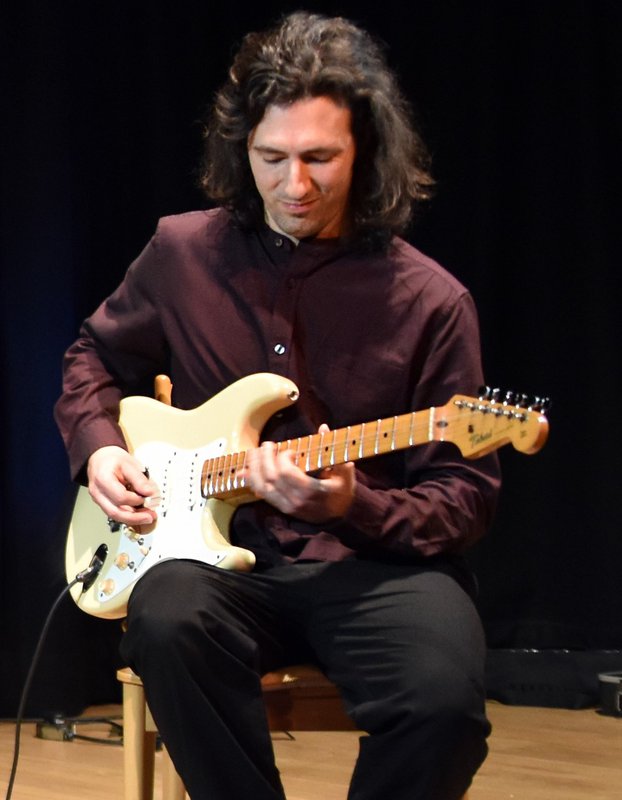 An evening of Classical Indian Ragas, Prog and Blues

Imagine what would happen if you had a guitarist highly trained in Indian Classical Sitar with a deep love of Jimi Hendrix, paired up with a bassist and drummer who are legendary in the UK Prog scene and added some Analog Sythesis for good measure!

That is the blueprint for Nataraja. The source of their material are the Ragas and compositions of North India and these provide a springboard for group improvisation and forging new textures. Expect quick fire interaction, infectious rhythms, lush soundscapes and beautiful Indian melodies played with passion.

Jack Jennings is one the few guitarists to fully adapt Indian Classical Music. He is disciple of sitar virtuoso's Roopa Panesar and Shakir Parvez Khan. He has worked with the legendary Pandit Sanju Sahai, Chandra Chakraborti, Manish Pingle and Gurdain Rayatt and many others. His previous band Ashowka fused Indian Music with Rock/Jazz and was signed to Geoff Barrow’s ( of Portishead) label in Bristol.

Andy Edwards is a drummer and producer. He has toured the world with rock legend Robert Plant and played on classic prog albums by Frost and IQ. As a drum clinician he has played with Terry Bozzio, Kenny Aronoff, Thomas Lang, Marco Minneman and Mike Portnoy.

John Jowitt has been awarded the British Classic Rock Society's award for best bass player seventeen times! He is best known for his work with IQ, with whom he recorded five studio albums, as well as Frost*. He also recorded and played live with Arena, Ark and Jadis, as well as playing bass live for John Wetton, Uriah Heep, Peter Banks (Yes), Tim Bowness and John Young, amongst others.

At times otherworldly, the music of electronic composer and modular synthesist Richard Charles Boxley, aka Wave Tenet, takes inspiration from artists such as Brian Eno, Aphex Twin and Four Tet. Sitting firmly within the world of ambient electronic, Richard's music has been described as having "Beautiful haunting sounds..." and "Pure tonal and textural beauty!".