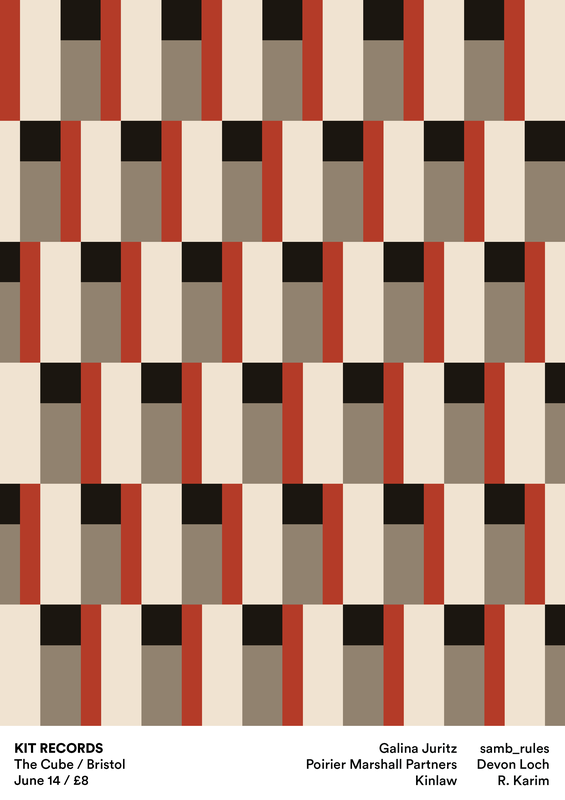 London label Kit Records began in 2013 as a fortnightly broadcast of exotic miscellany on London's NTS Radio, hosted by Richard Greenan. The show soon grew to encompass record releases, live events and a pop-up record store, drawing together an inspirational network of artists, musicians and writers.

The Bristol show will include various brilliant international musicians who have released on the label, alongside Bristol artists related to Kit Records.

Their début recording, ATELIER / FERME, sees pin-sharp found sounds woven amongst cavernous clicks, pops and weirdly synthesised voices to form an addictive, technodelic bricolage. Think Domenique Dumont floating in a sensory deprivation tank, or Joe Hisaishi enjoying a fine wine tasting holiday in Alsace. The FERME sessions of side B, recorded live in Sainte-Marie-aux-Mines, are all brooding orchestral stabs shot through folds of analogue organ, conjured from a snow-covered cabin. Recommended for fans of To Rococo Rot and Huerco S.

Bristol-based Rhodri Karim released Object of Unknown Provenance, which surfaced on Kit sometime in 2015. A selection of music from Karim's archives, written for film, theatre and his own enjoyment. His view is panoramic yet hyper-detailed - taking in elated cloudways and microscopically fractal terrain. Born digitally, but crackling with a weird sentience. Cold and warm. Tender vocals buried beneath painfully EQ'd, hiccupping breaks. VSTs self-chain, chatter and threaten to rip themselves apart like a centrifuge. OST to the Neuromancer film that never was.

Galina Juritz is a composer and violinist. Her credits include film soundtracks, theatre pieces, and recently music for the opera "Madness: Songs of Hope and Despair". Galina is currently studying an MA in composition at Goldsmiths.

samb_rules is Sam Bristow: DJ, illustrator and ex-chief of the videogamemusic imprint. Sam's ear for weird, glitchy and infectious music is second to none, and we look forward to him soundtracking the evening.

Hamish Trevis AKA Kinlaw hails from the Bristolian underground. The same scene that, in recent years, has given the most vital contribution to the freshness and vitality of a fringe sound suspended between the many clashes, deconstructions and reconstructions of dub and UK club music, radicalised through a diffuse interest in noise-tinged punkish grit. It should come as no surprise, then, that Kinlaw’s own music sounds both menacing and playful, weighing in with relentless slow beats and cranky lo-fi textures. The hypnotic percussions and sparse, hazy bits of melody make for an overall atmosphere of industrialized narcosis.