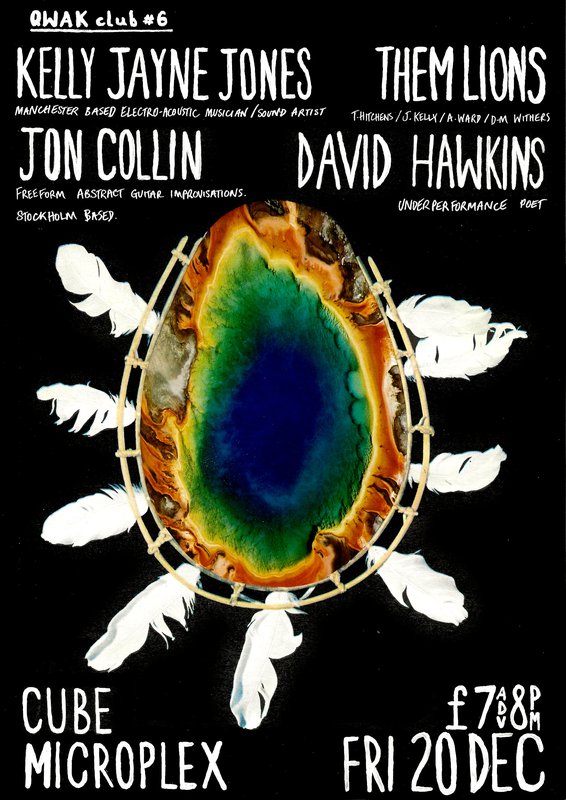 Kelly Jayne Jones is a musician and sound artist based in Manchester, working with performance art, installation and electro-acoustic composition and performance. Her work is largely based within the electro-acoustic composition tradition and uses graphic scores, instructions, actions, movement and audience participation and interaction to create multi-sensory experiences. She has ongoing collaborations with Hannah Ellul (White Death), Greta Buitkute (Clout Then Grappling), Andie Feathers (from These Feathers Have Plumes) and an improvising duo with guitarist Jon Collin. In spring 2018 she took part in a collaborative duo tour with American saxophonist Matana Roberts organised by the British experimental touring network OUTLANDS. She was formerly one half of the duo Part Wild Horses Mane On Both Sides and has been commissioned for works with various projects at dOCUMENTA13, Tate Modern, ICA London, CCA Glasgow, Trieze Gallery Paris, Borealis Festival and Kunsthalle Bergen, Tectonics Contemporary Music Festival, Hanger Bicocca Gallery Milan and Huddersfield Contemporary Music Festival.

Jon Collin is a musician from Lancashire living in Sweden. He has released several LPs of freeform abstract guitar blues and several more short-run releases of through-composed drone works. He is interested in recontextualising the expected role of the recording musician through outdoor recording and interactions with natural, mechanical and biological ambient sounds, while his live performances are continuous sound improvisations. As an artist his visual-conceptual work includes the long-term tape label project Winebox Press. His most recent LP releases are The Nature (Early Music, 2017) and Water and Rock Music Volumes 1 & 2 (Feeding Tube Records, 2018/2019).

QWAK club #5 was meant to be the last of the year, but the opportunity of hosting Kelly Jayne Jones and Jon Collin at the Cube could not be missed. Kelly's release on Bloxham Tapes earlier this year is really quite magnificent, and Jon Collin is perhaps QWAK club's most listened to artist over the last year - yet again, this is really quite some line-up!