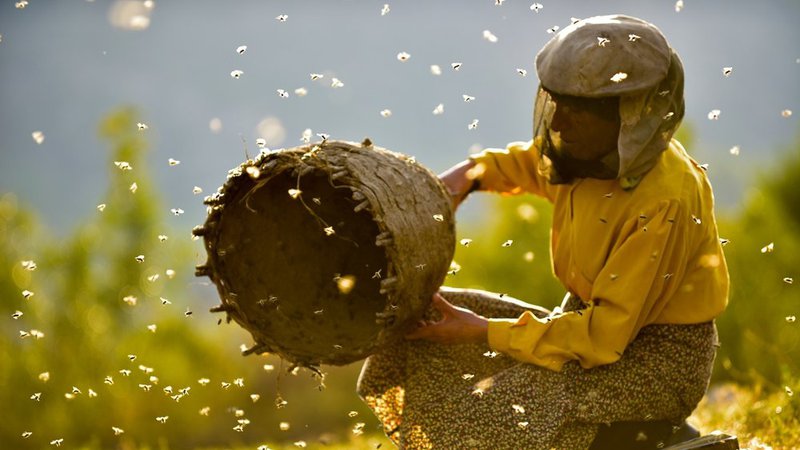 In a deserted Macedonian village, Hatidze, a 50-something woman, trudges up a hillside to check her bee colonies nestled in the rocks. Serenading them with a secret chant, she gently manoeuvres the honeycomb without netting or gloves. Back at her homestead, Hatidze tends to her handmade hives and her bedridden mother, occasionally heading to the capital to market her wares. One day, an itinerant family installs itself next door, and Hatidze’s peaceful kingdom gives way to roaring engines, seven shrieking children, and 150 cows. Yet Hatidze welcomes the camaraderie, and she holds nothing back—not her tried-and-true beekeeping advice, not her affection, not her special brandy. But soon Hussein, the itinerant family’s patriarch, makes a series of decisions that could destroy Hatidze’s way of life forever.

Alive to the magic of the natural world and the wisdom of agricultural traditions, Honeyland questions the cost, both human and ecological, of unsustainable growth and the reckless pursuit of profit. Filmed in a verité style with delicate attention to the ever-present cycles of nature, growth, life and death, Honeyland prompts us to reconsider the ways in which we are bound both together and to the earth; while its characters quarrel and toil, the rich Balkan landscape abides, indifferent.

“The opening frames of Honeyland are so rustically sumptuous that you wonder, for a second, if they’ve somehow been art-directed. Elegantly dressed in a vivid ochre blouse and emerald headscarf, captured in long shot as she nimbly wends her way through a craggy but spectacular Balkan landscape, careworn middle-aged beekeeper Hatidze Muratova heads to check on her remote, hidden colony of bees—delicately extracting a dripping wedge of honeycomb the exact saturated shade [of] her outfit. With man and nature so exquisitely coordinated, it’s as if Hatidze herself has grown from the same rocky land, and in a sense, she has.”—Guy Lodge, Variety

‘a miraculous feat…[an] astonishing, immersive environmental documentary…[Hatidze] is an incredible woman, a natural optimist’ ★★★★ - The Guardian

‘spectacular landscapes quaking with wind, susurrant with life or honeyed with afternoon light’ ★★★★ - The Financial Times

‘an experiential wonder, a cutting critique on capitalism and a genuine must-see’ ★★★★ - Rolling Stone