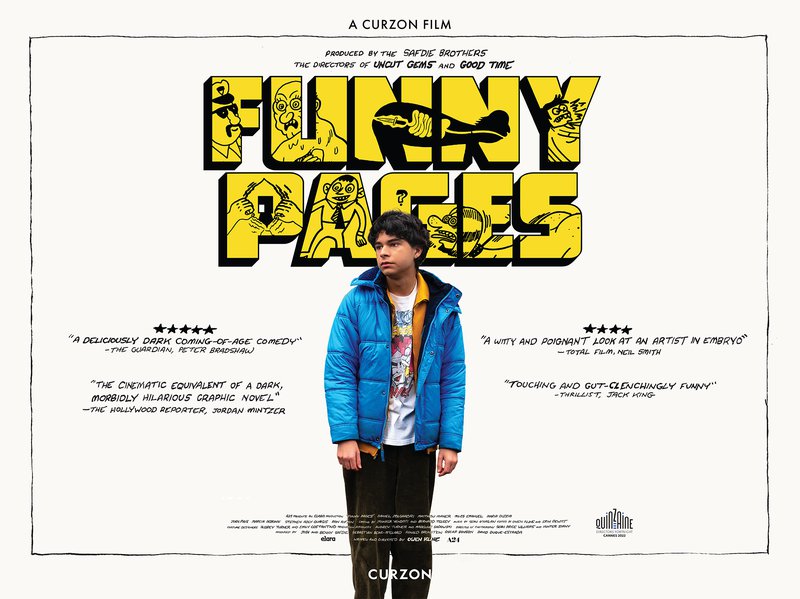 Produced by the Safdie brothers, Owen Kline’s directorial debut is a coming-of-age tale about a wannabe cartoonist reaching a crucial point in his life. A scuzzy dark comedy that makes you gag and laugh at the same time.

Robert (Daniel Zolghadri, Eighth Grade) believes that to be an artist is to suffer. So, he gives up on his affluent Princeton upbringing and drops out of high school in favour of life in a stuffy New Jersey apartment to really commit himself to his art. His best friend Miles is a fellow comic enthusiast, and both spend much of their time at the local comic store, obsessing over the work of artists more engaged with everyday life than the antics of superheroes. Their idols are the Robert Crumbs, Daniel Clowes and Harvey Pekars of this world. Robert sustains this lifestyle by working part-time at the comic store, and part-time at the office of a public defender. It is there he first meets Wallace, who, Robert finds out, once worked as colour separator for the legendary Image Comics. Ignoring Wallace’s borderline-deranged personality, Robert becomes besotted, leading him down a chaotic path of misadventures.

Just like the comics Robert and Miles obsess over, Funny Pages captures everyday life through the prism of the absurd. A session with an art teacher turns bizarre and then tragic. There’s a landlord who appears to have an extreme aversion to sunlight. And Wallace’s comic pedigree notwithstanding, he wouldn’t be out of place in an incel therapy session. Writer-director Kline, who played the young lead in Noah Baumbach’s The Squid and the Whale (2005) gives his film a grungy aesthetic in keeping with the style of his producers Benny and Josh Safdie (Uncut Gems, Good Time), perfectly capturing Robert’s world and psyche.

"Every character...they all reflect Kline’s perspective, which privileges oddballs and misfits and alternative culture fetishists over members of “straight” society." - Vikram Murthi, Indiewire

"Kline proves that he’s put in the work and knows his stuff, going so low-rent that he can’t be accused of coasting on nepotistic favor" - Charles Bramesco, The Playlist

"finds the sublime in the grotesque, and the profound in an absurd search for meaning" - Katie Walsh, The Wrap