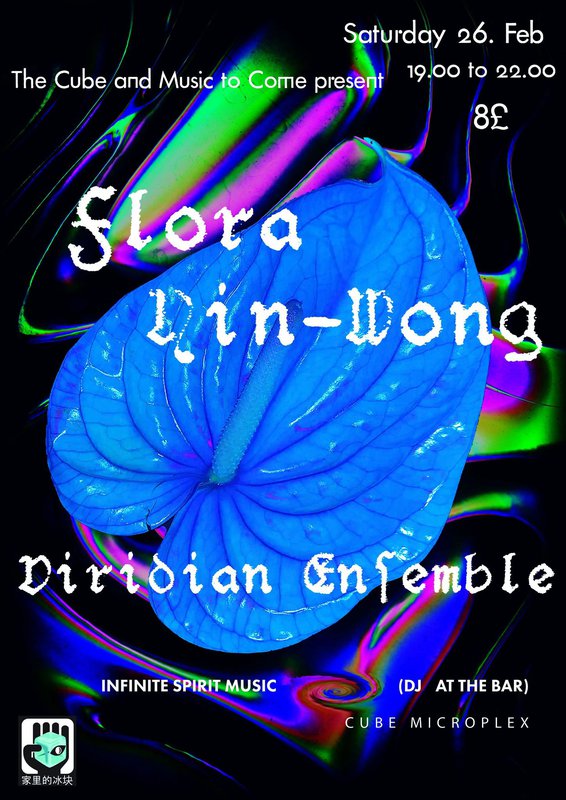 The Cube and Music to Come present

FLORA YIN-WONG is an experimental musician and writer from London, UK - often working with rudimentary field recordings and traditional / early instruments such as singing bowls, yangqin and kemence, with electronic processing and software, as well as text-based storytelling and abstraction. In October 2020, her debut album was released on Modern Love as a 2x gatefold vinyl. Prior to that, she had released on Berlin label PAN's ‘mono no aware’ album amongst work on other projects - whilst her tape EP 'City God' on New York's PTP, was inspired by the Daoist tradition of tutelary deities and the afterlife.

Her debut book titled ‘LITURGY’, exploring abstract fiction and non-fiction, fluidly interlinking themes like religion, modern mythology, paradoxes, and delusions - has just been released in June 2021 on Primary Information. Over lockdown, she was commissioned by Terraforma Festival and Atonal for poetry and collective sound pieces. After four years as a digital editor at Dazed & Confused Magazine, she has since contributed to titles such as Monocle, AnOther Magazine, TANK and Magnum Photos. She has also published three short fiction pieces for Somesuch & Co. and was scouted by literary agency, United Agents.

They have released a tape on The Brunswick Club Editions in November 2019, performed at Café Oto in October 2019 and February 2020. This last performance was released on the digital Otoruku label. They have also been commissioned by Aerial Festival and The Quietus during the summer 2020 for

Since September 2021, some members are exploring new chapters of their life, one in Cairo (Egypt), another in Aberystwyth (Wales) so every occasion to reunite will lead them to celebrate by performing a unique ritual.

DJ Infinite Spirit Music to welcome you at the bar with music concrete, experimental and sound poetry, refreshments.
https://noodsradio.com/residents/infinite-spirit-music

The is not a reduced capacity event. COVID-19 policy, please note a negative L.F.T. will be required to access the event.