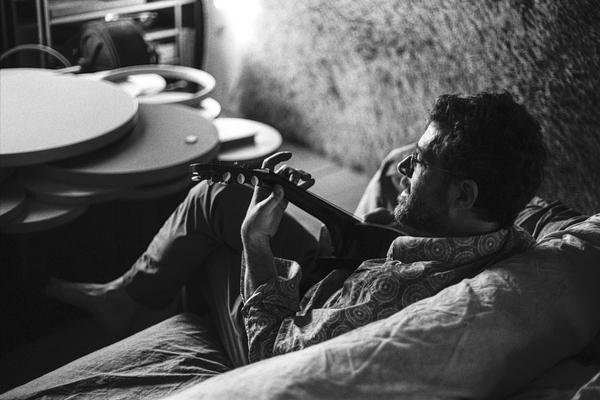 with Support from Annie Gardiner

While he has called Paris home for the past few years, Eric Chenaux was a fixture of DIY and experimental music in Toronto throughout the 1990s and 2000s, progressing from local postpunk legends Phleg Camp and Lifelikeweeds towards a highly distinctive technical and gestural mastery of amplified acoustic guitar.

Eric Chenaux operates among various musical ‘traditions’ but perhaps most broadly, his records grapple with the relationship between improvisation and structure in very particular, unique, idiosyncratic ways – and quite without irony or cynicism, through love. Because fundamentally, Chenaux writes love songs, which he sings in a voice honeyed and clear, while his guitar gently bends, frazzes, chortles, diverges and decomposes.

This juxtaposition of his mellow, dexterous crooning and his highly experimental (and equally dexterous) guitar explorations, explodes even unconventional notions of singing and accompaniment, of tonal and timbral interplay between guitar and voice.

Constellation has been home to Eric's "solo" records since 2006 – a brilliant discography of adventurous, sumptuous, mostly languorous deconstructed folk, jazz and pop-influenced balladry rooted in the juxtaposition of Chenaux's fried guitar playing and his gorgeously clear and lyrical singing voice.

Eric also composes and performs music for film and contemporary dance, and collaborates on numerous sound installations with visual/sound artist Marla Hlady, including Smedaholmen Tourist (with Amplifiers) (2012) for The Thousand And One Birds festival in Norway, and with filmmaker Eric Cazdyn, including a two week residency at Bristol's Cube Cinema, where they produced and performed the film Play The Cube in 2014. Chenaux has also performed and recorded with countless other artists over his 25-year career, including membership in Sandro Perri's band and appearances on Perri's albums, in duo with Radwan Ghazi Moumneh (a celebrated 2012 release on Grapefruit Records), Eloise Decazes, Pauline Oliveros, John Oswald, Michael Snow, Brodie West, Han Bennink, Michael Moore, Josephine Foster, Martin Tetrault, Wilbert De Joode, Gareth Davis, Jacob Wren, Norberto Lobo, Nathaniel Mann and many more.