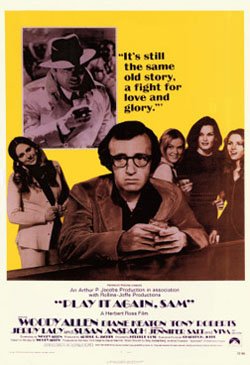 "If that plane leaves the ground, and you're not on it with him, you'll regret it – maybe not today, maybe not tomorrow, but soon, and for the rest of your life."

Woody Allen stars in (but unusually does not direct) this masterful 1972 adaptation of his own broadway play, which follows the romantic adventures of San Francisco film critic and recent divorcee Allan Felix (Allen), his best friend, Dick Christie (Tony Roberts), and Dick's wife, Linda (Diane Keaton). Interwoven with elements from Casablanca including clips, quotes and even dating advice from Rick Blaine, this is vintage Woody Allen.