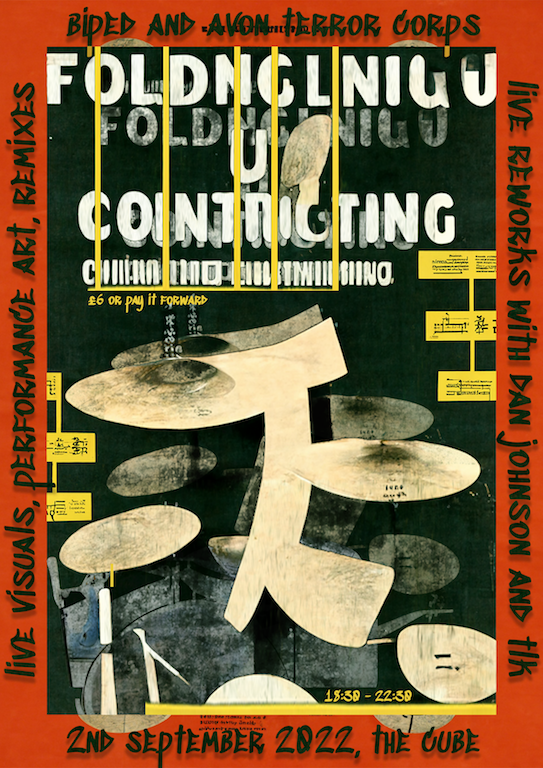 Tickets: £6 normal price / £10 pay it forward price By choosing £10, you contribute towards a ticket for someone who can't afford one, and help the artists get paid.

BIPED and other friends take over Bristol's weirdest venue to showcase once and for all the most extra release in local recent memory.
Finally, after metric barrelfuls of breeze, BIPED will play through the entire of the double EP: Folding Up / Contracting - Cumulative / Expanding.
This did happen once before but this...will be different.
Two of the tallest and most worshipped instrumentalists known to Western South England, Dan Johnson the 6000-armed drummer who can be found with a big grin carrying around two large gongs at any given moment, and t l k the tender strongman, often unrecognisable in a Chinese Normal University baseball cap, will be joining the meteoric, pathetic, endearing creature called BIPED to make real some of the faker songs in the recorded album.
In physical existence there are, somewhere, 50 USB sticks full of the seeds of audio and video that grew the big womping oak of the double EPs by BIPED + Blu Ball. Remixes of these by the willing, taxpaying public will be shown through the TOP SPEC projection + speaker systems THROUGHOUT the evening.
There will also be excruciating theatre in the predictably unpredictable style of BIPED shows - and live visuals from Blu Ball, coming up from London to pitch how misunderstood and poorly represented Londoners are.
We don't know what Avon Terror Corps will do - ever. The less they do the more we plead at their feet for answers to what seem like master-minded webs of futuristic medieval confusion. Will they liberate serfs from the gnarled fists of the leviathans of digital surveillance? Will they re-paint the Sistine Chapel with figures of Avalon yonder? Will they just sit around and clank metal together, seeking new-age trance? Let's find out.
ALL ANSWERS REVEALED at The Cube, Bristol-cum-Avon and Somerset.
Email for tickets if you can't make it because of lack of funds.