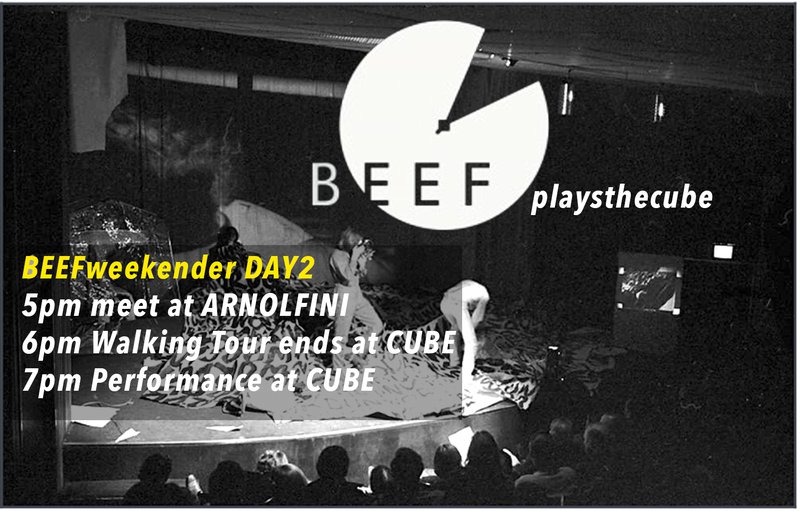 BEEF Weekender : SUNDAY EXPANSION TOWARDS AND INTO THE CUBE

Over this weekend BEEF will be expanding, experimenting and playing across CUBE and ARNOLFINI, thinking about the buildings past and present, and the work of Ian Breakwell who was based in the Cube building when it was The Bristol Arts Centre in the 1960s.

NOTE: DAY 2's main evening performance is at CUBE, but is preceded by a walking tour from Arnolfini. Tour and performance limited to 30 places. Masks required inside.

5 pm : Audience to meet at Arnolfini where your BEEF instructed tour guide will take you on a sideways take on the walking tour.

The tour begins at Breakwell's UNWORD installation in Arnolfini's Dark Studio, and continues through the city and up to The Cube.

6 pm : Arrive at Cube. An intermission / break for refreshment. Some sustenance will be provided for walkers.

7 pm  :  Performance in the Cube Auditorium by BEEF

Artist collective BEEF (Bristol Experimental Expanded Film) have been exploring the buildings present and past as part of our "playsthecube" residency series.

The place that now houses The Cube, was previously part of The Bristol Arts Centre, whose gallery and underground bookstall were run around 1966/67 by artist Ian Breakwell. While based at BAC, Breakwell also put on and performed in radical theatre and film events in the spaces between the conventional theatre runs of the Arts Centre, working in a networked DIY fashion that resonates with both Cube and BEEF today. BEEF have been busy bouncing about some of these ideas to spark new ideas and work.

The Arnolfini is also in the mix - a place Breakwell performed / had screenings in, and where a film piece documenting Breakwell's seminal 1970 expanded cinema piece 'UNWORD' is currently on display in their Dark Studio. Part of UNWORD was performed and filmed in what is now the Cube's auditorium. See here : https://arnolfini.org.uk/whatson/ian-breakwell/

BEEFweekender DAY 1 is occurring all at ARNOLFINI, though partly devised at CUBE, and includes consideration of how the two buildings, two Auditoria, and two Projection Rooms speak to each other.