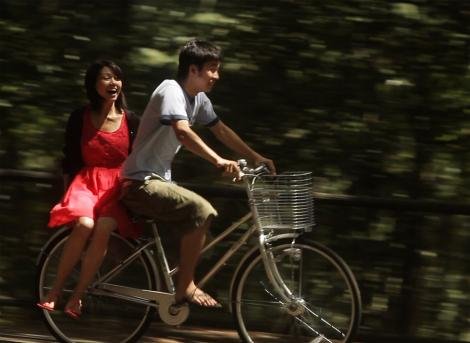 The moment just before adulthood is crucial, but it is not fleeting; somehow, it can be seized and suspended in time. This is 18 year old Sakuko's experience one last, almost endless summer before she takes a giant leap into the rest of her life.

Visiting her aunt Mikie in quiet, suburban Japan, Sakuko experiences the stretch of time ahead of her as if it were as far reaching as the horizon. She falls in love, makes mistakes, picks herself up and uncovers family truths locked away like so many heart-shaped boxes from the past. Trying to make sense of adolescence before it evaporates, she walks calmly, sometimes clumsily, towards the constantly moving image of her future.

Her aunt Mikie becomes a strong influence as she discovers a romance of her own. Meanwhile, Sakuko befriends a young Fukushima refugee, whose day job it is to clean and make up the bedrooms at the local Love Hotel.

Much like the lyrical, humanist films of Eric Rohmer, Koji Fukada is forever forgiving of his characters, allowing them plenty of time and space to discover their own unfettered paths in the strange, beautiful world that surrounds them. The pace is melodic, the photography stunning and the tone offers up poetic realism in abundance.

Beautiful and carefully considered, Au revoir l’été manages to meaningfully meander without ever becoming twee. A perfect film as we approach the precipice of another summer, Au revoir l’été screened at the Edinburgh and Fribourg International Film Festivals in 2014.

“A film in which a scene with only a boy and a girl walking along the coastline is enough to take your breath away. A film without exaggeration, violence and eccentricity.” This was Fukada’s intention when making his latest feature Au Revoir l’été.

The Cube is completely ad-free. Please note the feature will start following a short selection of trailers/information relevant to our programme. Doors open 30 mins before the advertised start time to allow time to buy or collect tickets.