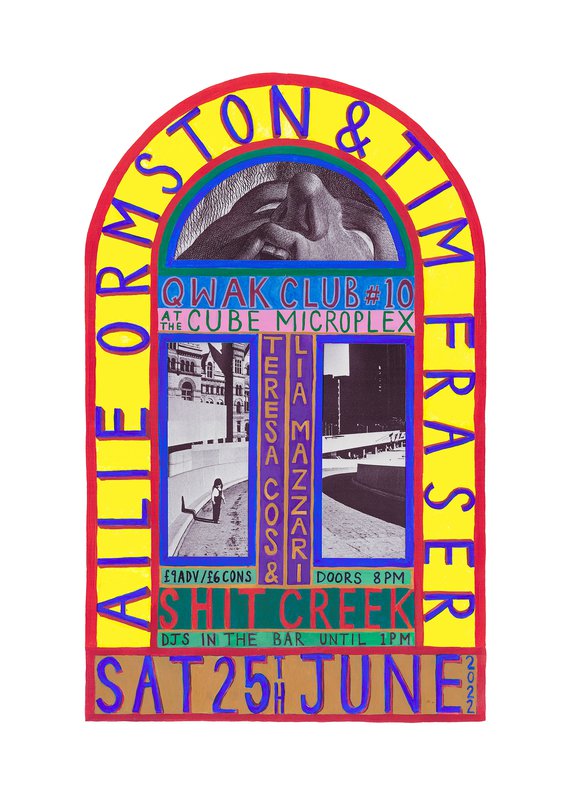 QWAK club is a carefully curated night from The Cube Microplex, bringing eclectic avant garde sound, visuals and performance together with a fun and inclusive atmosphere. All ticket/door revenue goes to the artists and towards the upkeep of The Cube.

DJs before, between and after the acts in the bar, which is open until 1am.

CONCESSION TICKETS: Exclusively for anyone who is currently unwaged or on a low-income. We are only able to offer a limited amount of these, so please do not take the piss.

We're extremely excited to be bringing Ailie and Tim to the Cube to present their new album 'It Changes', released on 20th May on Bison Records. Their first performance of material from the album was part of an epic audio-visual work at Glasgow's Counterflows Festival 2019 in the CCA, and it was a huge highlight from the whole festival - QWAK has been super keen to bring them to the Cube, a perfect venue for them, ever since. All the pestering has finally paid off and the new album is cracker, take a listen:

It Changes incorporates samples of collaborative session material, automated MIDI instrumentation, and adhoc field recordings. The recordings were then completed in 2020 during the first lockdown using voice notes, and by running a 7.5m headphone cable between their neighbouring flats in Glasgow.

The album’s title It Changes is taken from a Sherman Brothers song of the same name, written for the animated film Snoopy Come Home. It mirrors themes of alienation and attachment associated with Peanuts characters, and looks at modern individualist and consumerist ideas of desire and liberation. It uses the 1992 UK Clubland anthem Only Love Can Set You Free by N-Trance as a central motif, noting the last three decades of neoliberal policies and affected culture. References to the decline of the welfare state and increased surveillance are contrasted with sincere messages of love and resistance.

Ailie Ormston released an album with Finlay Clark (Still House Plants), ‘Sunflowers Face The Sun’ in 2020 on 33-33, as well as a solo double EP, ‘The Sedate/Tony Soprano Fashion Inspo’ in 2018. Tim Fraser has a forthcoming solo release due in 2022.

A new cello / guitar duo from these two (sound) artists / musicians. No one but them has heard this new project, but their various collaborative releases on Cafe Oto's Takuroku label are gems.

A guitar and prepared light bulbs & fly swats duo. Deep, sensual thrum and crisp static, crackle and pop. A performance earlier this year at a Cardboard Club was intensely enjoyable, thrilled to have these two on board to kick things off.

>>Shit Creek unable to perform on this occasion due to travelling up from Brighton proving impossible. We'll get them booked for a future Qwak.