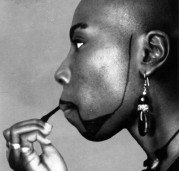 (Mon 3rd / 7:30pm / £3/£2 - though nobody turned away through lack of funds)
In conjunction with Bristol Indymedia, Gender is Fake presents a night which questions our thinking about gender, sex and sexuality.

We bring you excerpts from Venus Boyz, an award-winning and original documentary about female masculinity. Also 'Politically Erect' - short films about revolt in sexuality and sexuality from Montreal. And join us for our queer quiz, a piece of interactive, thought-provoking entertainment. Plus prizes, zines, and vegan food.
Is gender a patriarchal invention? Is a person's sexuality as fixed as we think? Is our gender identity governed by capitalism?

Come along to question barriers and boundaries, and celebrate the freedom to exist in the un-named!