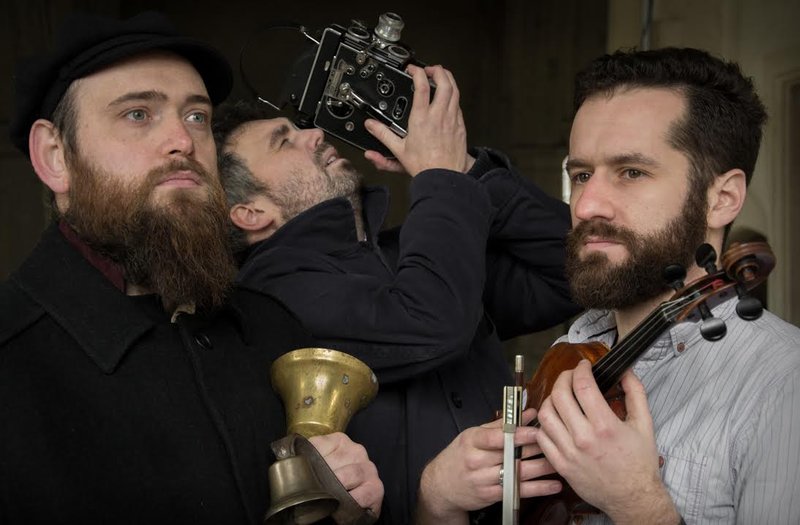 The dexterous, quiet and beautifully subversive Dead Rat Orchestra have joined forces with analogue film maker James Holcombe to craft a unique live soundtrack to his film Tyburnia, a film that draws on the histories of London’s infamous execution ground: the Tyburn Gallows.

Dark Matters is three night journeys into a maze where music and images conspire to make strange things happen.

For over 600 years, those who fell foul of political, religious and judicial reforms were executed for public entertainment and instruction at Tyburn (near Marble Arch). Holcombe’s study of those executed at Tyburn charts an alternative history of the UK, illuminating the twists and turns of sovereign and political whimsy, church and state, and the birth of mercantile capitalism. Highly charged and stylised with a unique sense of place and purpose this is a radical history worth watching.These forgotten histories have important resonances in the present day, resonances that Tyburnia brings forth.

Dead Rat Orchestra will perform interpretations of songs in Thieves’ Cant, the long forgotten language of the criminal underworld. DRO have grown a reputation for creating jubilant performances from forgotten archival materials. Likewise, Tyburnia has provided an opportunity to breath life back into some very rare songs, crafting contemporary visions of long forgotten laments, songs and ballads.

Shooting on 8mm and 16mm film, James Holcombe gained access to numerous artefacts associated with Tyburn; reliquaries housing the remains of catholic martyrs, body parts preserved by surgeons, the bell that tolled on the eve of executions, and the eventual resting place of the gallows themselves. Using hand processing and historic chemicals, the film is both visually and thematically engrossing, demonstrating how, despite the gallows having long since vanished, we still stand in the shadow of it's punitive ideology.

Featuring at this 3 day micro-festival epicentre are artists who have devised, collaborated and summoned up the courage to make stunning live A/V shows that delve deep into their respective preoccupations and interests. Innovative, thrilling and not for the squeamish, these are artists who aren't afraid to explore areas beyond the pale, deep into the Dark Matters.