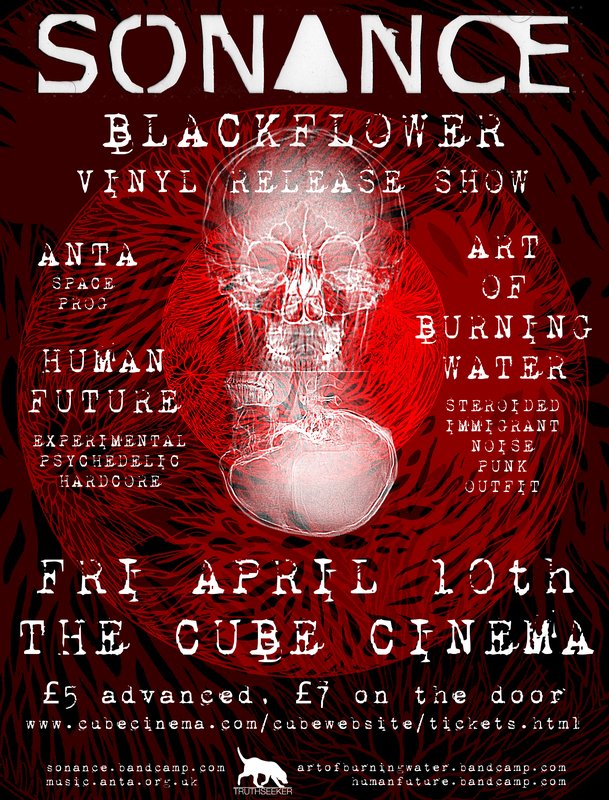 SONANCE first played The Cube back in 2012 ahead of their début release 'LIKE GHOSTS' on Doognad Records.  Since then the band has toured the UK and Europe and appeared on the main stage of the first edition of Bristol's Temples Festival, which they will return to this year along with a slot at ArcTanGent festival.

This show will see a run through of the new record 'BLACKFLOWER', with a new member taking advantage of The Cube's awesome projector capabilities.

"Multi instrumental and wise beyond the band's years, there is an air of the supernatural mastery of Ulver throughout, a delicateness and exactness of touch, and a confidence that is persuasively beguiling." - Ninehertz.co.uk

"Blackflower is a masterpiece of post-metal headfuckery in the vein of Cult of Luna‘s more labyrinthine moments, bathing you in gentle layers of delicate sound before grabbing you by the hair and shrieking into your face like the demon in Aphex Twin‘s ‘Come to Daddy’ video" - Onemetal.com

"Track three, entitled Attachment, is a highlight. Think the song writing strength of early Boston filtered through Scott Walker and guitar feedback. Backing screamed vocals are placed deep in the mix, effectively making them another instrument. What appears to be a modular synth crept up on me in the last third of the song, nearly making my chest rattle with its forcefulness." - Louderthanwar.com

"They churn out a swelling dark cloud that storms over the songs, with flashes of feedback against the raging howls. I have to admit, this was the year I began to tire of the twenty minute song trend, but these guys know how to justify every minute that's indulged." - Cvltnation.com