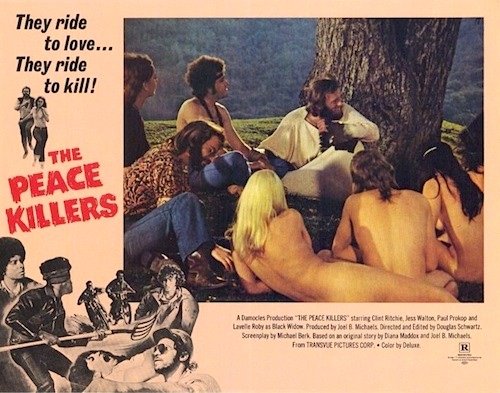 April’s Hellfire hits ya with a couple of hippie flicks that push their laid back heroes to the very edge of the peace and love precipice.

Lead film ‘The Peacekillers’ is an obscure but cool Hippies vs Bikers movie from an age when studios were blindly turning out ‘youth’ pictures to the dozen, throwing them at ‘the kids’ and hoping some of them would stick. Well, this one may not have hit the classic button at the time (or since), but it sure is a lot of fun, as a bunch of seriously mean-ass bikers invade a peaceful hippy commune to take revenge on the peace loving freaks who tempted their leader’s ‘old lady’ back from the dark side. But how will the pacifists deal with a bunch of murderous muthas out to destroy everything they hold dear?

Hardly a surprise to learn that future ‘Baywatch’ director Schwartz fumbles any ‘message’ the film may have intended and concentrates on the sleazy action. Twin Peaks fans may also delight in seeing a youthful Sheriff Harry S. Truman amongst the oppressed longhairs.

Stick around for dessert though – the second feature throws up another massive bummer, as a young draft dodger seriously loses his shit whilst holed up on a paradise island with a gang of likeminded beautiful people, in what must be one of the most bizarrely zonked commentaries on the collapse of the utopian dream ever made. Dig it.

As always, Hellfire DJs will be in the bar spinning far out downer tunes before, between and after.