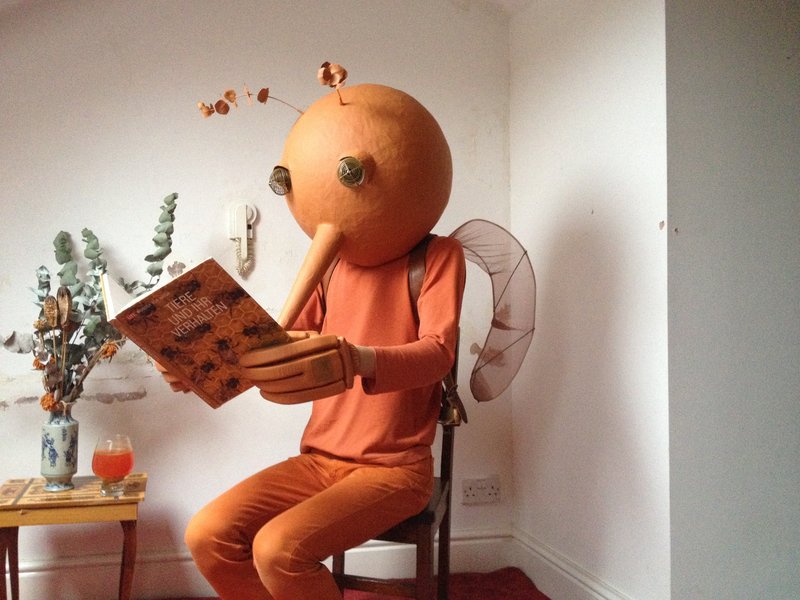 Six years ago experimental folk multi-instrumentalist Rachael Dadd packed up her tools and set off from the west to the east on an exploratory journey to Japan, a country she knew nothing about. Meanwhile in the city of Nagoya ICHI was living off the thriving underground music scene, pioneering a new concept in one-man music-making, creating catchy, danceable songs, playfully choreographed with handmade inventions, toys, instruments and a rhythm box. Whilst on tour playing in galleries, hairdressers and even singing her songs at an organised show on a moving train, Rachael met ICHI at a DIY festival in an old wooden house on the outskirts of Nagoya.

"I sat on the tatami watching this intriguing Japanese man patiently assembling his set-up for his show: numerous hand-made stands and speaker boxes painted orange, mega-phone, tape-machine, alarm clock…Aware that my heart was ticking I waited for his performance. From his entrance on stilts to his exit the same way I was engulfed in a colourful whirlwind and something in my head exploded. Since then I have been adopted into Japan's underground scene, ICHI has been making waves in the UK, and we are married with a 1 year old son, who comes on tour with us"

This split 7" single is Rachael and ICHI's first joint release, a milestone in their musical relationship and a taster of what's in store from them as individuals. Rachael's song, 'Make A Sentence', pulses with a pastiche of percussive objects and playful vocal lines and features ICHI on the typewriter. It is about the important role that communication plays in our lives so that we may "reap the joys of camaraderie". It's a theme particularly poignant on this split release as when they met neither Rachael nor ICHI could speak the other's language.

ICHI's song Go Gagambo opens with a universally recognisable mosquito hum, then proceeds with a catchy, familiar-sounding bass line, strummed out on a long, thin insect-like home-made instrument, while the vocals are punk-like, small and high-pitched, in the language of the insect itself. It's a song about mistaken identity - (gagambo is an insect unfortunate enough to be mistaken as a big mosquito, resulting in probable death by angry clapping hands), and it is a clever blend of the familiar and the bizarre. ICHI`s simple concepts and playful presentation have universal appeal. When you can't speak the lingo there are many other tools for communication, best of all music itself. After all, it is the universal language of music that brought ICHI and Rachael together in the first place.