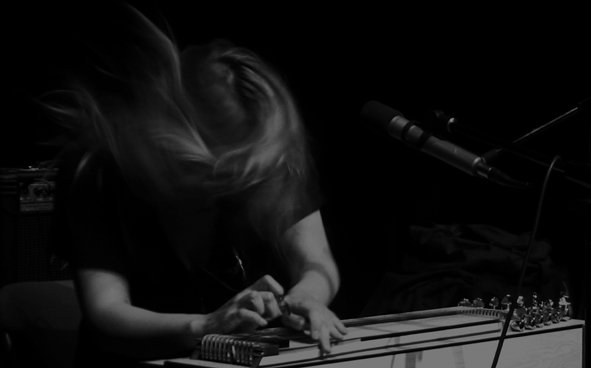 Qu Junktions and The Cube present two furiously intense and vital sets of performances by a pair of remarkable duos. Musical as hell. Carla
(vox/guitar/keyboard) and Massimo (bass) will, going by their amazing history create a musical tension that is gripping and a raw sound that is also heartfelt. Jailbreak are drum and pedal steel pyrotechnics in extremis. The name foregrounds the kind of outlaw violence with which the two reformulate rock/roll instants by bringing free jazz fire power to amp-humping sex beats.

JAILBREAK are a rare sight/sound as the duo of pedal steel/vocalist Heather Leigh (Scorces / one of the heads behind Volcanic Tongue) and drummer Chris Corsano (Jim O'Rourke/Evan Parker/Bjork) don't get together oftern. Leigh’s steel mainlines sanctified slide guitar sources and deforms them with overdriven electricity, playing a form of future-blues exploded by super-charged currents. Corsano detonates time, literally blows it to pieces, in favour of a profound polyrhythmic feel that would confuse past and future. Yet the whole thing rocks like it hasn’t a braincell to spare, re-connecting avant garde tactics and ass-whooping rama-lama.Their musical alliance goes all the way back to the legendary Brattleboro Free Folk Fest, the birthplace of the ‘New Weird America’, where Corsano and his long-term saxophone partner Paul Flaherty joined Leigh and Christina Carter for a quartet show that took the roof off the building and the skin off their fingers.

As collaborations goes CARLA BOZULICH, who has one of the most unique voices in any genre -brutally raw and weirdly visionary, playing with MASSIMO PUPILLO, whose visionary and hard hitting bass playing astounds and confronts, is going to be something to experience. Carla sings her own world into being. From Gerladine Fibbers and as the woman who re-made Willie Nelson’s Red Headed Stranger to sound art projects and her strong ties with Constellation Records who release her songs sung with Evagelista all of Carla's music has a magnetic power. Massimo is best known from playing in the tight but wild Italian maverick group ZU but has also played with The Ex, Mike Patton and Dimension X (a Sci-Fi free jazz project also feat Chris Corsano) and with "Original Silence", a band featuring Thurston Moore, Jim O' Rourke, Mats Gustafsson, Terrie Ex, Paal Nilssen-Love, as well as with Han Bennink and Guy Picciotto of Fugazi.