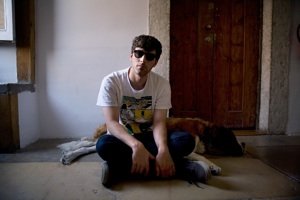 Ducktails + Dolphins Into The Future

Qu Junktions brings on pure phase and distorted pop logic from three acts who have emerged from the passing kriss-krossed currents of cheap AM pop, distressed easy listening and a weird love for 90's electronica. Sounds that endure and refresh.

Ducktails is Matthew Mondanile from New Jersey, who makes raw, mostly
instrumental pop music that is two parts heart to one part hypnagogic: sweet, dewy analogue drones, huggable guitar figures that nuzzle at classic rock’s sensitive bosom, and simple tin machine rhythms help propel Mondanile’s present into the warm fuzz of the past. Also one of subsurface pop gang Real Estate, and with strong links to the Skaters/Olde English Spelling Bee axis of psychedelic semi-recall, check last year’s “Landscapes” album for the heartiest portion of Ducktails soup yet, and get ready to slurp yerself happy.

Fading in from Flanders, Belgium, Dolphins into the Future plunges us yet further down the memory well. By turns strange, primal, intimate and
transcendental, this is a beautifully drowsy Lowlands take on James Ferraro’s more reflective moments of spooled quasi-devotional psych, with swooning prose from The Wire for last album proper “The Music Of Belief” and a whole library of tapes and CDRs to get lost in besides. “Camp-fiery mind music that sounds like taking a bird-watching nature hike in a sequencer”, froths Impose Magazine, not incorrectly.

Plus support from Bristol's very own Woodtripper