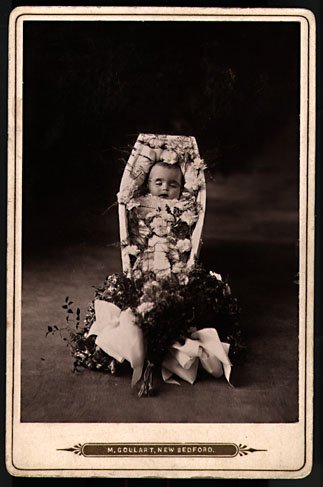 Death In America, A Chronological History Of Illness And Death

WARNING: CONTAINS IMAGES THAT SOME WILL FIND OFFENSIVE.

The fashion for photographing the recently deceased during the late Nineteenth Century in America is a now largely forgotten craze; swept under the proverbial carpet by the ancestors of those photographed dead.

This documentary is based on the Sleeping Beauty books by Lawrence B. Burns, owner of the largest collection of memorial photography in the world. Featuring in depth interviews with Burns as well as many scholars and professionals this film serves as the chronology of death in America, explaining how the subject of dying was eventually sanitized and made taboo in the Twentieth Century as ‘the site of death’ moved from the family parlour to the funeral parlour and diseases such as diphtheria and scarlet fever were conquered with the introduction of penicillin.

The film will be preceded by a slideshow of Memorial Photographs and
accompanying talk.