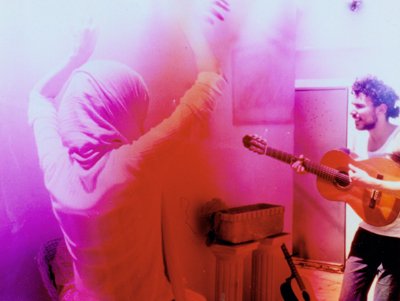 One of the most luminous and enlightening American singers of her time sings Federico Garcia Lorca’s popular folk song collection “Las Canciones Populares Espanolas” with guitarist Victor Herroro and live band. Singing in Spanish, playing the castanets and dancing, Josephine brings to life these famous songs from one of Europe's finest poets and dramatists.

Josephine describes the band “as like a Andalusian jug band playing very energetic and animated music”. Taking their cue from Lorca and La Argentinita’s infectious 1931 recording of the songs, Josephine Foster and her partner Spanish musician Victor Herrero have arranged the poetically rich collection for their new acoustic band, formed while living in the Grenadine Sierra.

“She’s a Grace Slick for the 21st Century - and that’s all grace, no slick. An amazing combination of God-given ability and formal skill. You can hear Jefferson Airplane in her music, Quicksilver Messenger Service, Joan Baez… She’s also the one, out of that whole scene, that has embraced the electric guitar, while at the same time being the most classical of them all.” - Jay Babcock / Arthur
Out of a tiny village in the rural north of Italy, staunch indie promoter and tour booker Tiziano Sgarbi becomes song hero Bob Corn. Sketching with simple lines of guitar and voice, he conjures pretty/anxious tracks concerning people and love, like early Adrian Orange or a bare-boned Bonnie Prince. "A great cat...beautiful tunes, very soulful" said Mike 'Minutemen Watt'. "Oh Mother Mary, Bob Corn is a real shit!" said someone else (in Italian)...we're certain this is a good thing.

As a plus tonight we get SJ Esau, a favoured son of Qu/Bristol downing tools to play a rare interim show before his drooled-for brand new album drops next year (almost ready).

Late treat - after his show-stealing performance at St. Bonaventures a few weeks back we welcome back Frank Fairfield, this time armed with his unrivalled gramophone record collection for a DJ set of ultra-rare 78" stomp-a-longs and jug band bangers.