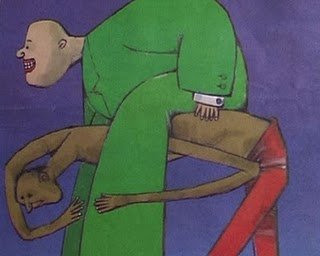 Venezuela has many faces: A South American republic, a former Spanish colony, neighbour to Brazil in the south and Colombia to the west. It has the 7th largest reserves of oil in the world and currently supplies most of the US's daily oil needs.

Politically the country has had a turbulent history; wars, revolutions and Coup d'états - the most recent of which was in 2002. 'Listen To Venezuela' takes the viewer into a contemporary revolution and extraordinary experiment in radical democracy and social justice. In Venezuela, people have rejected the savage neo-liberal capitalism that has been imposed the world over. The once
marginalised majority have become political actors in a story they have reclaimed from the Venezuelan oligarchy, Western business interests and Washington. This ambitious documentary evokes the scale and difficulties of radical social change in a political and poetic collage.

The directors Mike Wayne and Deirdre O'Neill spent 11 months in Venezuela and made the film while they were working there. They will introduce the film and do a Q&A after-wards.