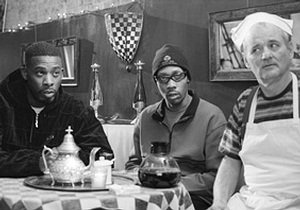 Charming deconstruction of the mindsets and etiquettes of western cafe culture, explored through a series of quirky little b/w films. 20 years in the making, the film overall has all the laid-back attitude of its various tobacco-smoking, java-gulping protagonists, each of whom spends their screen time ruminating on a host of arbitrary issues involving class, race, and physics.

A very popular, accessable and funny feature returning to the Cube after January's sell-out show. Featuring such luminaries including Iggy Pop, Tom Waits, the White Stripe's Meg and Jack White, and the Wu-Tang Clan's RZA and GZA with Bill Murrey!!! And many, many more.