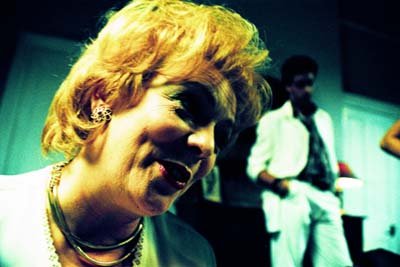 Donald Leek (David Threlfall - most recently seen as Frank Gallagher in TV's Shameless) is a banal sociopath from Burntly who has a sexual fantasy which involves Julie Andrews and Chunky Monkey ice cream. His apartment is invaded by a string of uninvited guests - neighbours, family and friends, some violently evangelical skinheads, and even the Lord's own son, reborn in the body of a black man named Trevor. This film brings together an unlikely cast of off-kilter caricatures and features Alison Steadman and Colin McFarlane.

Shot in just 14 days for a mere £160,000, this independent effort could quite easily have gone the way of so many small British productions and simply disappeared into anonymity, but something about this film attracted the attention of vast corporations and international luminaries, including Unilever (who currently own the Ben and Jerry's ice cream brand), the Rogers and Hammerstein estate, EMI and Miss Andrews herself. A deadpan crowd pleaser very much concerned with the spirit, and the very silly.