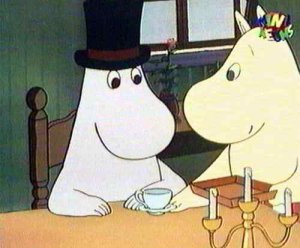 The Moomins are the central characters in a series of books by Finnish writer Tove Jansson, originally published in Swedish. They are a family of Scandinavian trolls who are white, round and furry in appearance, with large snouts that make them resemble hippopotamuses. The carefree and adventurous family live in their house in Moominvalley, though in the past their temporary residences have included a lighthouse and a theatre.