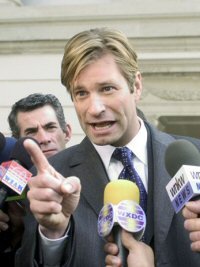 Thank You For Smoking

Tobacco industry lobbyist Nick Naylor has a seemingly impossible task: promoting cigarette smoking in a time when the health hazards of the activity have become too plain to ignore. Nick, however, revels in his job, using argument and twisted logic to place, as often as not, his clients in the positions of either altruistic do-gooders or victims. Nick's son Joey needs to understand and respect his dad's philosophy, and Nick works hard to respond to that need without compromising his lack of values.A smart satire of both corporate and smoking culture from the son of Ivan 'Ghostbusters' Reitman.