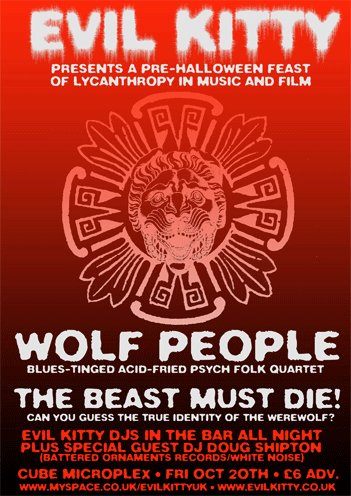 Evil Kitty welcomes Wolf People! The Blues-tinged acid-fried psych outfit, centred around the precociously talented and obsessive purveyor of counter culture Jack Sharp, present this homemade, handcrafted stomper - the result of a penchant for vintage recording techniques and an experiment to see how loud you can record onto a 1960s Grundig home tape recorder before it becomes unlistenable.
Over the past year the psychedelic Wolf People commune has welcomed a host of collaborators, including Tom Hubmann (The Midnight Orchestra), Marisa Straccia (The Lady Wolf) as well as Jack’s own mum and dad on tin whistle and blues harp respectively. Months of painstaking experimentation and a burgeoning live schedule have seen Jack shrink the ranks to just a core of four members, with Gabriel LLoret, Tom Watt and JOe Hollick making up the numbers.

Full DJ support from the imps and demons of the night - John Stapleton, Daddy Ya Ya, Andy Jenks and Zee-Man.