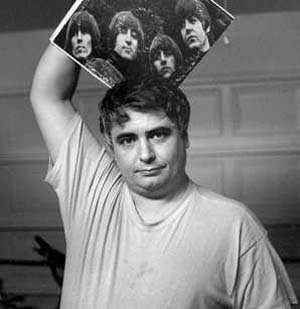 The Devil And Daniel Johnston + Portrait As

An incredibly touching documentary about one of America's most unlikely pop phenomenons. Daniel Johnston burst onto the indie/folk scene in Austin, Texas in the mid 80's thanks to his heartfelt, tender style of performance. He was featured on an early MTV talent showcase and had his songs included on Generation X film soundtracks such as KIDS and MY SO CALLED LIFE. But, from the time of his ealiest successes his inner demons were taking a grip and he suffered severe bouts of depression that led to a nervous breakdown.

Throughout these dark times he was championed by the likes of Kurt Cobain, David Bowie, and Matt Groening amoungst other luminaries! This film offers a unique insight into the equation of creativity vs madness- from an early age he was an obsessive self-chronicler, shooting super-8 movies, keeping a running diary on cassette tapes, and filling books with sketches and writings. THE DEVIL AND DANIEL JOHNSTON is simply bursting with this priceless material, laying bare an intensly troubled yet beautiful soul, and will appeal to hardened fans and newcomers alike. A very Cube film.

Local premiere of a visual portrait of the disabled avant garde filmmaker Stephen Dwoskin who has enjoyed a long and successful career. Visual dichotomies explore the contrast between ability/disability, youth/age, past/present, as seen through the house he has lived in for the last 30 years and the objects within it that both surround and represent him. http://clairefowler.com/wip.html