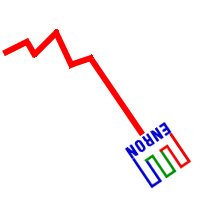 Enron The Smartest Guys In The Room

We all heard about the collapse of Enron- the Texas energy firm that in the year 2000 was the seventh-largest company in the world, worth $70 billion, with a chairman being talked up for a senior post in the Bush administration. Within 18 months, the money was gone and the company bankrupt. 5 years on few could admit to having much of a grasp of the human tragedy (and the wider implications) behind the unfathomable figures and barefaced greed. Its collapse is more than a neat metaphor for the short-fallings of modern capitalism.

This new documentary masterfully sketches out the intricate financial/legal shenanigans in simple yet comprehensive terms, employing masterful editing, good music, slick graphics and pop-culture references to enhance the narrative. It has been wowing critics across the board (including a 5 star review in Empire!) for presenting a seemingly dry topic as an engaging disection of events without resorting to 'mudraking', compared to F9/11 and THE CORPORATION. Fully-rounded, this is a thoughrally watchable and relivent piece of work that deserves your attention. Bristol premiere.