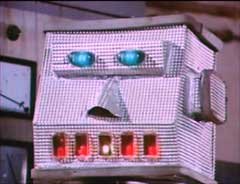 The Hell With Hollywood

Our ceaseless quest for all that’s hot, happening, and half-witted in world cinema takes us to the exotic city of Istanbul, for the UK big screen premier of ‘The Deathless Devil’. This surreal slice of 70s Turkish cheese pits local crime-fighter Copperhead against the fiendish Dr Satan, who commands a cadre of cardboard killer robots that make Metal Mickey look like the latest in CGI wizardry. (Fans of unfortunate monikers may like to note that star billing goes to one ‘Kunt Tulgar’. His name was of course changed for the US release. To ‘Kunt Brix’…) Brawling, babes and bad music predominate in a crazed celluloid extravaganza that will leave you breathless with disbelief and craving a large donner on the way home. Add our usual chilli-sauce-style extras of traumatic trailers and strange shorts for the ultimate menu of fast-food, big-screen weirdness!