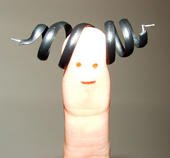 I'm Being Good: Depending who you ask they're a math band, a noise band, art rock, punk, spazz, or something else. Truth is they have always maintained that they are a pop band. They've been around since 1992 touring and playing shows with the likes of Trumans Water,Storm and Stress, Lightning bolt and Deerhoof, and have just released their 4th album 'Family Snaps' on Jonson Family records.
Shimmy Rivers and and Canal: Songues mit drumbs of blud type "garret rusk" in the staples of mucking out runnel after runnel. Wirds sand stounds to boatongo.
The Guild of the Furious Lion: A heavy horse pulling a cart of freshly grated Romney Marsh horseradish, feeding on the decomposing peelings of prog, folk and rock 'n' roll.