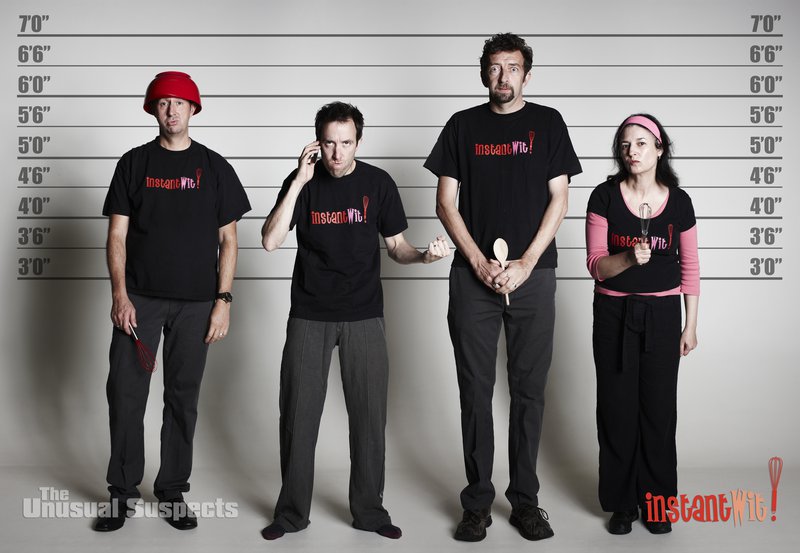 Instant Wit, the best in improvised comedy. Fresh and inventive, each show throws up new nuggets of hilarity crafted by a company of the highest calibre. It’s a pick-me-up tonic with unexpected twists and a dash of sauce.

There’ll be sketches, songs and general silliness – and all of it based around audience suggestions. And if you’re too shy to shout anything out? Well don’t worry, you’ll have the chance to write things down in the interval. We’re the ones who’ll look daft, not you!

So now’s the time to indulge yourself if you’ve always had a secret yearning to see something really bizarre on stage. How about a Country and Western song about a wonky shopping trolley? Or a scene set in a submarine where the actors can only ask questions? Well why not? Your wish is our command. Good suggestions get flying packets of custard, the best a bottle of wine.

Many people have seen improvised comedy on the t.v. – but remember, this is not recorded and edited, but totally live, making it trickier for the actors but more exciting for the audience. So, if you like your comedy fast-paced and with a slightly unusual edge, this is definitely for you.

We’re proud to use some of the best in local talent, with our performers regularly appearing at the Tobacco Factory, Theatre Royal Bath and the Bristol Old Vic and our musician this time will be the Cube Orchestra’s very own Marcus Valentine.

Instant Wit – a bunch of very Unusual Suspects who are forever on the run from the Comedy Police.

"These are conspicuously skilful performers - everyone is exhilarated on stage and off!"
The Guardian

“Instant Wit produce a show of surreal, mad-cap improvised hilarity that will leave you aching with laughter, chuckling with the stupidity of it all and, no doubt, wanting to go again.”