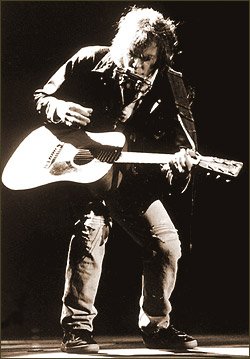 Year Of The Horse

All too often music documentaries are sycophantic portrayal of an over-inflated ego, usually commissioned by the proud owner of that ego as a way of offering adulating fans a rare insight into the private life of a genius who is really just a regular guy. And all too often this information is presented to us in the most indifferent way, lumping together interview footage with concert footage to a template established somewhere in the dinosaur days of the 1970s, a habit which, despite being declared obsolete by Spinal Tap as far back as 1982, still persists. Thank god, then, for Jim Jarmusch. Bringing the effortless cool of his hip indie features ‘Stranger than Paradise’ and ‘Mystery Train’ to the documentary field, he delivers – with infectious enthusiasm – a portrait of Neil Young which is affectionate without sycophancy, and rocking without the threat of parody. Along with ‘Stop Making Sense’ and the up-coming ‘Block Party’ one of the truly great music films of all time.