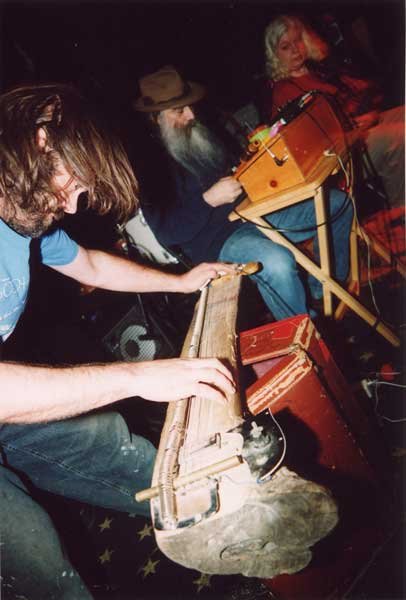 You have almost cult bands and cult bands. Smegma is Cult with a capital C. Smegma's roots lie in the Los Angeles Free Music Society (LAFMS) scene of the mid-1970s, and yet this long-running avant-rock collective remain one of the few groups from that era still active today. With the musicians hidden behind strange pseudonyms such as Amazon Bambi, Burned Mind (borrowed by Wolf Eyes for their latest album) and Dr.ID, Smegma mix psychedelia, improvisation, folk, and noise using buzzing homemade synths, records players, horns, guitars, toys, tapes and lots of weird gear. Merzbow, Wild Man Fisher, Steve McKay (Ths Stooges sax player) and Wolf Eyes are among those who have collaborated with the band.
Runzelstirn & Gurgelstock is the work of long-running avant-garde visionary Rudolf Eber. Originally emerging from the the Swiss Schlimpfluch scene, along with folk such as Joke Lanz (aka Sudden Infant), he has a reputation for severe recordings and unpredictable live shows. His is the noise of spluttering soundscapes, gagging, dogs barking, a spurt of a melody, a sack of shit being punched, a vomit opera.

Deepkiss 720 (aka Jason Williams) is a shadowy figure on the UK noise
underground. Jase started out with I'm Being Good in mid 90's Brighton, whilst exploring the less popular areas of art, noise and tape label culture with Dylan Nyoukis and the Prick Decay clan. DK720 set out to supply a "shit sound" for screenings by experimental film maker Jeff Keen. It went on to produce recordings of magic mushroom psychosis and bloodletting live shows, pre-empting the current crop of noise manipulators by some years.