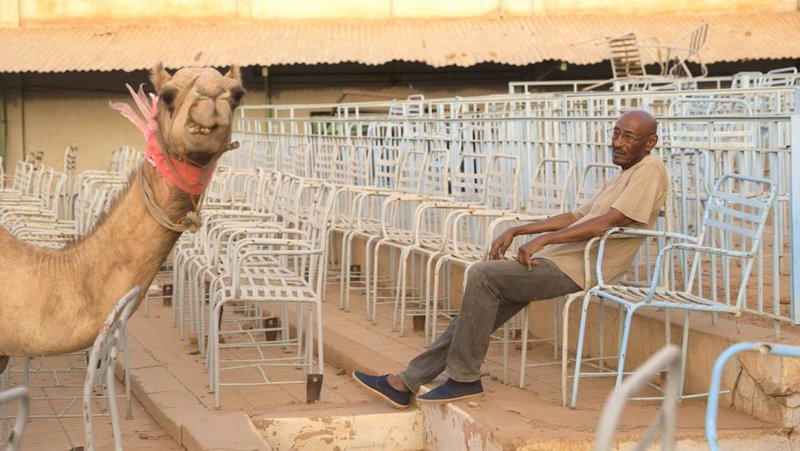 “What kind of times are these, when To talk about trees is almost a crime Because it implies silence about so many horrors?” ― Bertolt Brecht

Ibrahim, Manar, Suleiman and Altayeb are the members of the Sudanese Film Club founded in 1989. Unable to make films for years, they have decided to revive an old cinema. They are united not only by their love of cinema and their passionate desire to restore old films and draw attention to Sudanese film history once more, but also by the fact that they all enjoyed a film education outside Sudan.

Their plans to renovate the outdoor cinema come up against bureaucracy, lack of cash and a general fear of upsetting “he who cannot be named.” (The film was made before the recent overthrow of Omar al-Bashir).

In the meantime, they sit together and talk about the past and the history of Sudanese cinema, including their experiences of persecution and even torture as oppositional artists. They recall their times of exile and dream of a Sudan in which art and intellectual thought can be free. ‘We are smarter than them, but not as strong,’ is the conclusion.

Even if their plans may be unfulfilled, the strong solidarity and humour of the four no longer young men, and their new recruit, Hana, do give hope for the future.

★★★★ ‘This poignant and witty documentary focuses on four directors whose careers were stalled by a military coup thirty years ago…which is not to say Talking About Trees is a laugh a minute A rather lovely poetic portrait of male friendship, cinephilic obsession and elegant dignity.’ Cath Clarke, The Guardian

★★★★ ‘As another year’s Oscars beckon and the world’s most feted directors line up to be feted once more, this sad, charming homage to some of their less celebrated colleagues could hardly be a better preface.’ ‘Profound — a tribute to the strange communal magic of cinema, and what happens when it becomes invisible.’ Danny Leigh, FT

★★★★ 'Gentle, observational documentary about a group of film-makers bringing cinema-going back to Sudan...where young generations have never known cinema-going as a communal experience.  Through the sadness and frustration, their sense of humour never wavers.  Nor does the underlying certainty that what they do matters. Languidly paced, but never uninteresting, the film demonstrates the tender brotherhood that exists between four old friends' Sophie Willard, The List

“For those who have the option of actually watching a film on the big screen yet prefer to stay glued to Netflix, Talking About Trees is a telling true story of what happens when such an option expires for good.” Jordan Mintzer, The Hollywood Reporter