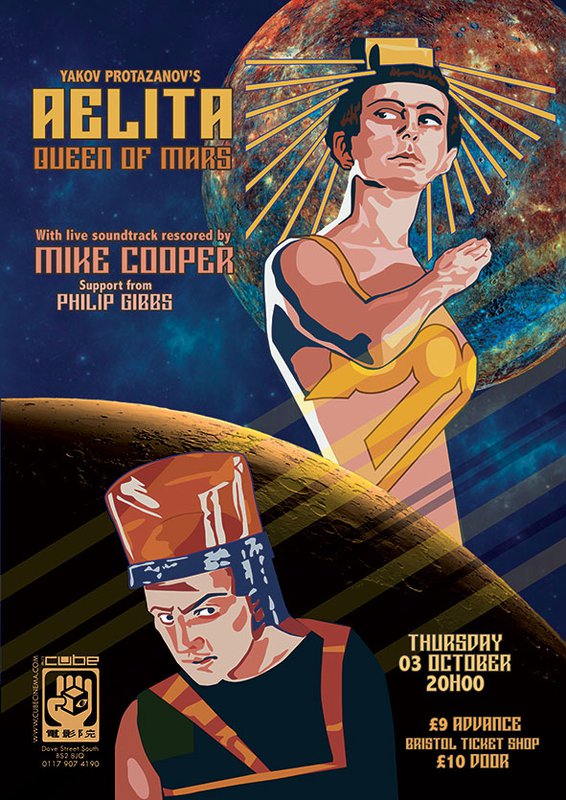 Tonight will see Mike Cooper perform a live soundtrack to the Russian 1920's film Aelita. Aelita is a silent, black and white sci-fi film made based upon a novel by Tolstoy. This live music/film will highlight Mike's versatility as a musician. As a pioneer guitar player in the 70s folk-rock root scene, Mike has travelled far beyond the limits of genre, fusing pedal steel with ambient glitches and piercing insect sounds for instance. For this show Mike has sampled and remixed many of his 70s records as well as improvising passages of music and using new instruments.

This is a short trailer with a sample of the music http://www.cooparia.com/projects/silent-movies/aelita/

As a fan of Jazz, Dixieland skiffle and the music of New Orleans Mike went on to form the R&B band The Blues Committee in 1962. However as an artist Mike has never sat still and in addition to his love of this music he has performed music of the south Seas and played in both the ambient and electronica fields. As well as playing on over 60 records to date Mike works as a music journalist, a visual artist, a maker of films and videos as well a collecting Hawaiian shirts.

Mike will be ably supported by the jazz guitarist Philip Gibbs. Philip has produced number of ground breaking recording as a composer and solo guitarist. He has also played on over 40 recordings including many with internationally recognised players such as Markus Stockhausen and Hamid Drake and is a critically acclaimed master of performances.