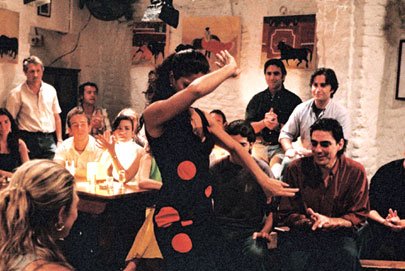 Enchanting road movie about cultural identity and love in expanding European Union. Naïma and Zano (Lubna Azabal and Romain Duris - seen recently as the lead in French gangster thriller The Beat That My Heart Skipped) are a young couple of Arabic descent who abandon their Paris highrise apartment to seek out Zano's
roots in Algeria. As the couple hitchhike through the sumptuous Spanish landscape to North Africa, they encounter many refugees making the reverse journey. The mood steadily shifts from impersonal metropolitan opulence to a more spiritual, heartfelt adventure.

Director Gatlif, himself an Algerian Gypsy, taps into the energy of local music and dance, with many breathtaking sequences having a fly-on-the-wall documentary feel. At times intense and emotional, but very colourful and charming
throughout. Winner of the Cannes Best Director award. Bristol premiere.