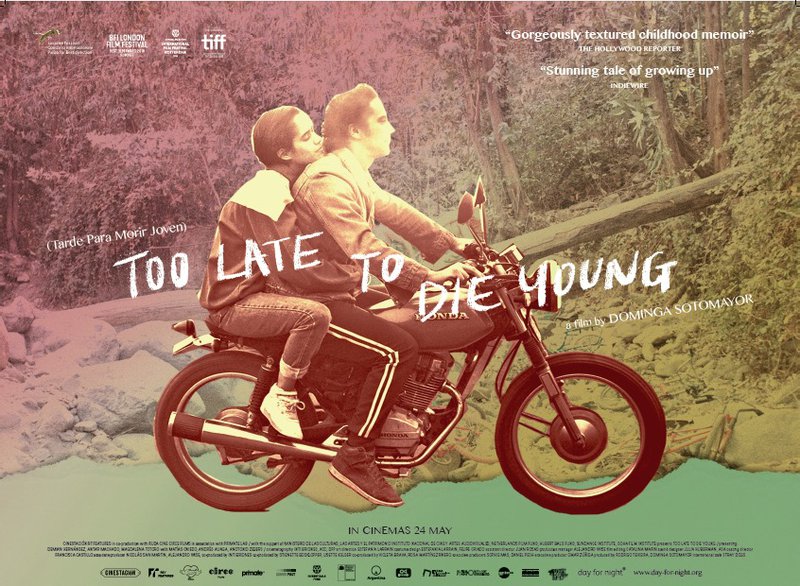 Too Late to Die Young

Set in Chile in the summer of 1990 as the country comes to terms with the end of Pinochet’s dictatorship, Too Late to Die Young is a beguiling coming-of-age drama, partly inspired by the director’s own experiences growing up in the alternative ecological community of Peñalolén.

In an environment lacking both electricity and clear social rules (since the adults are pretending to live in a utopia), a group of unsupervised teenagers face the most important summer of their lives attempting to make sense of their own burgeoning desires and tangled relationships.

Sixteen-year old Sofia, the daughter of a famous singer, who is largely absent from her life, becomes intoxicated with the motorbike-riding Ignacio—much to the dismay of her friend, Lucas. Meanwhile, ten-year old Clara is more concerned with the whereabouts of her beloved dog.  Featuring a standout performance from newcomer, Demian Hernández, as Sofia, this is a subtly observed and beautifully shot evocation of a time brimming with hope and trepidation, with Inti Briones’ cinematography capturing perfectly the sun-scorched hues of an endless teenage summer.

"has a gentle, freewheeling quality, focusing instead on experiences, moments and sensations" ★★★★ Cine Vue

"Visually, the film is a dream" ★★★★ Little White Lies

The Skinny: ★★★★ “the film remains incredibly sensitive to the weight of political upheaval happening outside the frame”

RTE: ★★★★ “Nervy restlessness and the anticipation of doomed innocence shadows the brilliant Too Late to Die Young... Recommended.”