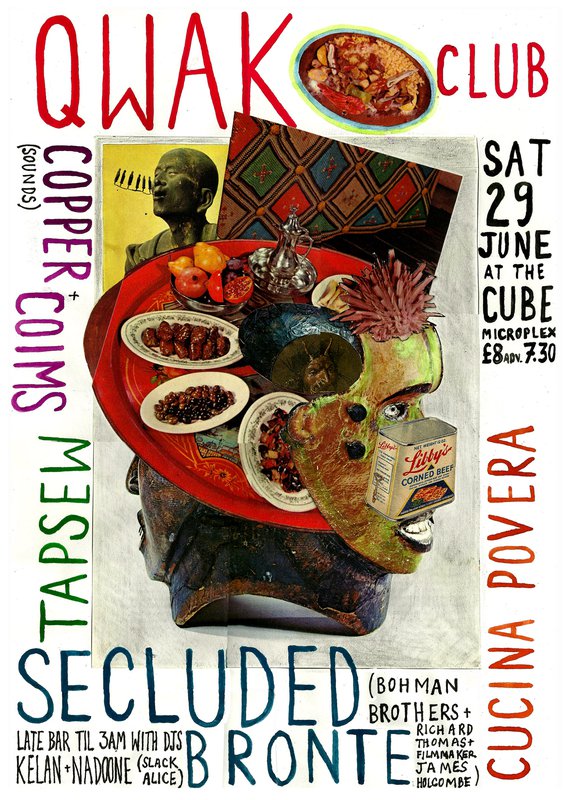 A carefully curated night at the Cube bringing the outer reaches of sound, vision and performance together with a fun and inclusive atmosphere.

Tickets: £8 advance from Headfirst, £10 on the door

Cucina povera is a solo project of Finnish-born Luxembourgish vocalist and synthesist Maria Rossi who masterfully experiments with layered vocals, field recordings and minimal synthesis. Following the recent release of her second solo LP Zoom, after last years Hilja (now sold out of two pressings), both on Glasgow’s Night School Records, Maria is embarking on a few select live gigs around the UK and internationally to bring a close to her present chapter as her focus shifts to a number of collaborative projects. Working from the dual framework of precarity and serendipity, Maria creates unique worlds via minimal sound, providing an opportunity to her listeners to drift away from their own interior sphere. This will be the second Cucina Povera appearance in Bristol, following a very memorable performance at the Brunswick Club last summer.

QWAK club are extremely proud to be hosting the debut Bristol performance of London’s Secluded Bronte. Formed in 2001, the group are Adam + Jonathan Bohman of The Bohman Brothers fame and Richard Thomas, who has a vast and fascinating history, including collaborations with the likes of Squarepusher, Stereolab, and Add N to X. Adam Bohman has been operating on the outer fringes of the UK underground since the late 70s and was recently described by Ed Baxter of Resonance FM as a “national treasure” during a Q&A following the premiere of a new film about Adam.

Secluded Bronte mix pre-recorded sound compositions with live electroacoustic music using a variety of non-instruments. Live, the trio incorporate Fluxus japery, musique concrete, free improvisation, occasional quasi-poetical outbursts and theatrical trappings. For this performance they will be collaborating with experimental filmmaker James Holcombe for an expanded, all-engrossing experience. James and the trio are in the process of completing a feature length experimental film provisionally entitled ‘Against Cinema‘.

The earthy scrapings, clatter and thunder of the COPPER SOUNDS duo will grind in unison with the swollen dirges concocted by the COIMS pair. A promise of heavy depth metal and eco rock jazz. This will be the first live outing of this collaboration between two titans of Bristol’s experimental music and sound art scene.

A rare outing from the high drama duet of sewing machine and tap dance. Scissors on thread; needle through cotton; metal via body on floor. The sounds of the machine and tones of the floor played out in tap, creating pace, tempo and rhythm in repetition, unification and flashes of exhilarating chaos.

The first performance will begin shortly after 8pm.

Following the four performances, there'll be dancing in the bar to the selections of heroes Kelan and Nadoone (Slack Alice) until 3am. Entry to the Cube bar is free, a ticket is only required to enter the auditorium.