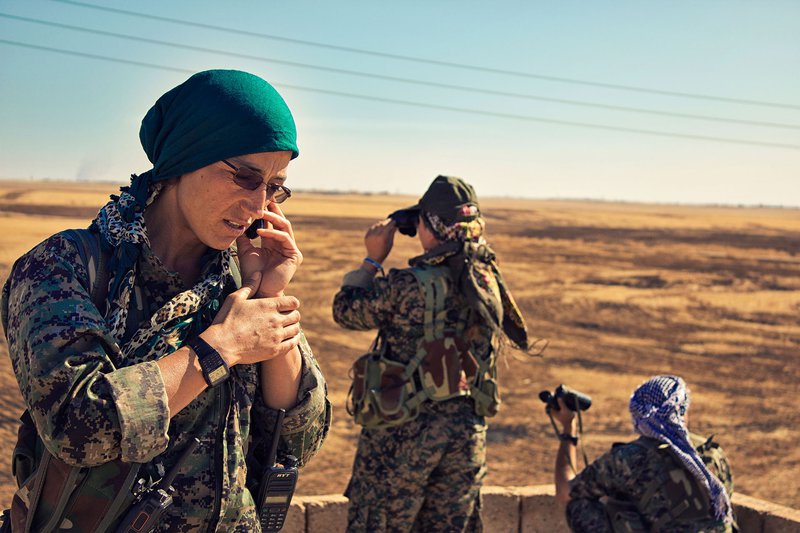 and Rojava – A Call to Arms

A society, known as Rojava, has been building in the heart of the Syrian civil war. Born out of the Kurdish freedom movement, this revolution is constructing a life based on the principles of freedom, direct-democracy, anti-capitalism, ecology and feminism. Whist it is in the midst of constructing a radical reality of society, it is also on the front lines of the War against ISIS and defending itself from surrounding states. Not only does it have a mixed-gendered fighting unit (the YPG) but it also has a women’s only defence fighting unit (the YPJ).

This event consists of two films plus a Q & A following the lives, workings and principles of members of the YPG and the YPJ as they fight for freedom.

In the Syrian countryside, 30 year-old military commander Arian leads her battalion of women as they fight ISIS. For her, the armed struggle is the only path to emancipation from a deeply patriarchal society. At her side, director Alba Sotorra documents the liberation of the city of Kobane and uncovers the reality of life at the frontline. Wounded by 5 bullets, Arian is forced to deal with the wounds of war, both visible and invisible, and to find new ways to fight for women’s freedom.

Ricky Moyse’s film follows the life of an international volunteer fighting with the YPG (People’s Protection Units), the mixed fighting units of Rojava. The film follows Charlie whilst they were a part of the YPG, the struggles of returning to ‘normal’ life and their motivation for joining the revolution. “When people ask me why I did these things, it’s so that people could be free.”

Following the screening Charlie, a previous YPG volunteer who joined the revolution in Rojava, will be taking questions from the audience. Having travelled and participated in the revolution and been a part of the Kurdish freedom movement, Charlie will be able to provide first-hand knowledge and experiences.