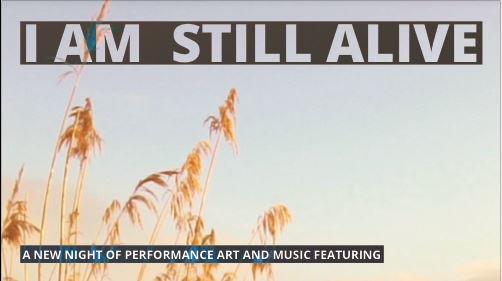 I Am Still Alive!

A Night of Performance Art & Music

The concept for ‘I Am Still Alive’ is to bring live art to a new audience by placing it in a format similar to that of a musical gig. For this evening, ‘live art’ will be distinguished as any practice that plays out in real time with a conceptual element. For this night, I will not be presenting the cabaret side of artistic performance.

Durational live artworks often play out over many hours, days or weeks. The idea here, is to condense the time frame down to small digestible chunks, around fifteen to thirty minutes, to engage a captive audience. We will have 3 or 4 artists performing interspersed with live music.

Artists on the night will include:

Andrew Neil Hayes is a musician and artist living and working Bristol. Most known for his work playing saxophone in Run Logan Run, he is also a member of The Artist Project Space, an artist led collective in Bedminster.

Eva Martino is an Italian producer and artist now based in Bristol. She has performed at events all over Europe including Venice and Istanbul International Performance Art weeks.

Diwas Dewan recently studied BA Fine Art at Spike Island. His practice tries to understand his situations and his desire to make films. Somehow it makes medium of its own.

Kayla Painter is an electronic producer, using fragmented beats and manipulated sound to create dark and dreamy soundscapes. Working with a live visual artist they create an immersive AV show.

Pasha Serdiuk is an independent film maker and writer. Born in Ukraine, he studied filmmaking in Paris and London where he now lives. He is interested in contemporary art, philosophy, sexuality, gay and queer identity and experiments with music videos, video performances, visual poetry and video art. He also makes art documentaries for London galleries.

MARCY is a conceptual art trio and cult formed of practising lecturers from Bristol Institute of Modern Music.