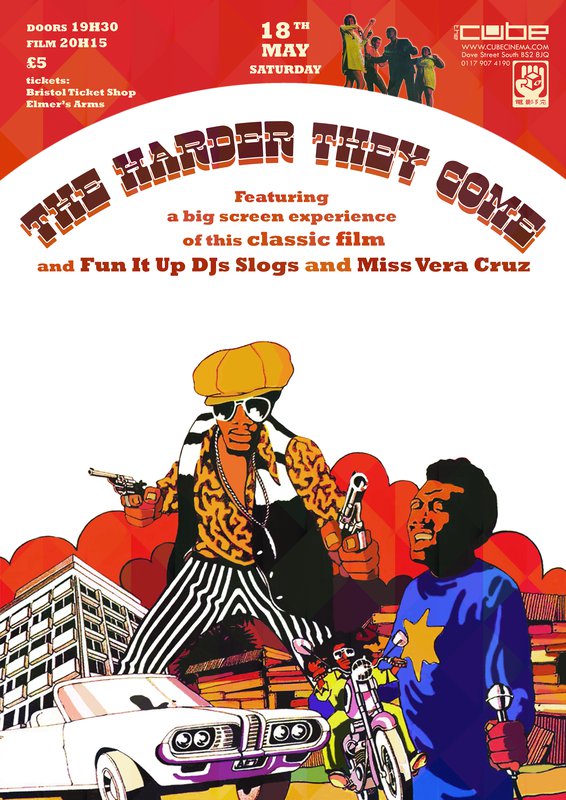 The Harder They Come

Tonight the Cube is honoured to present both the classic film The Harder They Come along with the very real support of the Fun it Up DJs  (Miss Vera Cruz and Slogs)  famed for the depth of their record collections.

The Harder They Come stars reggae legend Jimmy Cliff stars as Ivan Martin, an aspiring young singer who leaves his rural village for the capital city of Kingston, Jamaica hoping to make a name for himself in the world of music. Robbed of his money and possessions his first day in town, he finds work with a self-righteous, bullying preacher and an unscrupulous music mogul who exploits naïve hopefuls. In desperation the country boy turns outlaw. This gritty and in so doing takes on every vestige of the established order. This, ground breaking film brought reggae music to the international stage.

The Harder They Come was the first film ever full length Jamaican film released. Directed by Perry Henzell, a Jamaican, in 1972 it quickly became a cult movie in Jamaica, where it was shot, but also managed to become a cult classic in the rest of the world.  Bristling with authenticity the story is loosely based on the true story of Rhygin, a true outlaw who became a ‘Robin Hood’ figure amongst Kingston's poorer communities in the 1950s. The lines are delivered in Patios and the actors all who are Jamaican are largely amateur add to this feel. It can clearly be seen that the film was a low budget production but, rather than diminishing the viewers’ enjoyment of the film, this along with its realistic style of shooting is in keeping with its gritty subject matter and actually adds to the film's atmosphere, feel and mood.

Following this unmissable film I’d like to welcome Sloggs and Miss Vera to the Cube. They will be bringing the authentic sounds of 60s Jamaica to the Cube after the film . Armed with the best tunes in 60s reggae, ska and rocksteady. They aim to present you with a mixture of gems to fill your boots, all on original 45 vinyl. You can expect to hear heavyweight tunes and rarities, as they keep your feet moving to the beat.

Miss Vera and Sloggs who have played at the Glastonbury festival before and will again this year are two DJs at the top of their game . I for one will ready testify to their skills and danceablity as DJs. In fact last time I heard them I’m sure my bum didn’t even touch a seat and I'm sure all who saw them recently in town will agree with this.