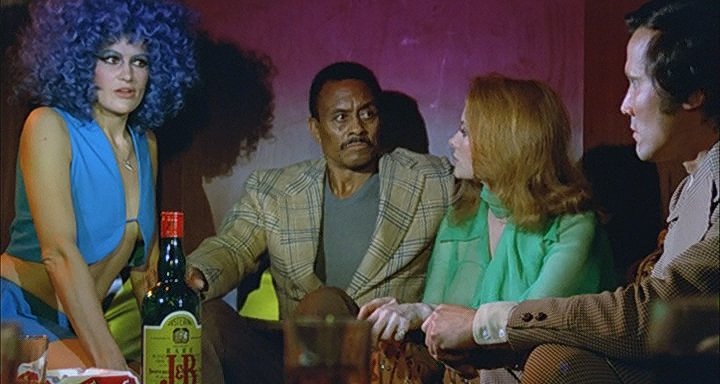 aka Manhunt in Milan

It's been literally YEARS since our last Euro Crime screening (Umberto Lenzi’s ‘Almost Human’, back in 2012), so fire up your battered Cinquecento - we’re all-set for round two! Time to return to the lawless cities of 1970s Italy, where vicious hoodlums lurk on every corner, and no pedestrians are safe in the face of 90mph (that’s 144 kph!) car chases, steaming through the narrow cobbled streets!

When a huge shipment of drugs disappears somewhere between New York and Italy, an arrogant Mafia boss casually fits-up a dopily-affable small-time pimp (Mario Adorf) for the theft. After the stateside mobsters send a pair of stone-faced goons (Henry Silva and Woody Strode) to Milan to retaliate, said pimp finds himself the unfortunate decoy on their hit list. But, out of their depth, this shady underworld scene may prove a tougher nut to crack than they bargained for…

Director Di Leo is frequently held up as one of the best ‘Poliziotteschi’ directors, eagerly chronicling the crime underworld to such an extent that at one point he apparently feared assassination by the mob himself! Tonight’s main course, the second in his loose ‘milieu’ trilogy (don’t worry – you don’t have to have seen its predecessor), is an ace example of what makes this such an enduring exploitation genre. Minimising intricate plotting in favour of a plethora of punch-ups, stare-offs, go-go dancers, and cold-blooded beatings, Di Leo keeps the action flowing at a steady pace, whilst throwing some of his own trademark counter-cultural interests into the heady mix (check the decadent hippy commune). Unlike most of the genre, this one keeps the law out of the equation, focussing wholly on varying shades of criminal – so set your moral compass accordingly.

As always HFVC DJs will be in the bar, battering your ears with assorted police-funk and Euro-gloop.