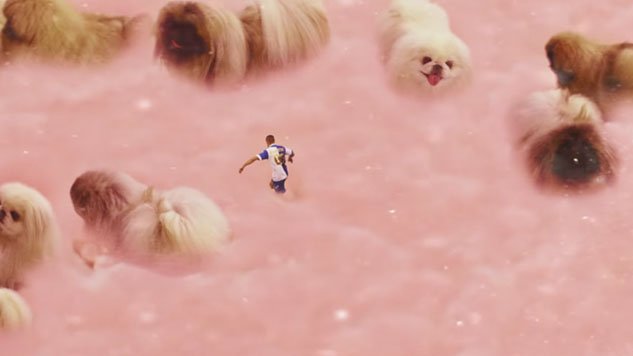 Grand Prix winner of Critics’ Week at Cannes, Gabriel Abrantes and Daniel Schmidt’s singular Diamantino is at once a queer fairy tale, a sci-fi thriller, and an outrageous political satire of modern Europe.

When he misses the big goal on the world’s largest stage, chiselled fútbol star Diamantino (Carloto Cotta) flees the public eye; no longer able to conjure the giant fluffy puppies that guided him to superstardom, he is rendered a vessel without a purpose. And thus begins an unexpected journey toward love and enlightenment that involves cloning, the CIA, a Syrian refugee, and Diamantino’s nefarious twin sisters. A perversely pleasurable sendup of Brexit, genetic science, and the ongoing refugee crises, this dazzlingly original feature from longtime collaborators Daniel Schmidt and Gabriel Abrantes skewers its subjects with loving cinematic gusto.

“One of the year’s most singular debut” - Variety

“Such a gem” - The Hollywood Reporter

“Diamantino is like looking at today’s Europe through a funhouse mirror, and somehow seeing it more clearly as a result“ Indiewire